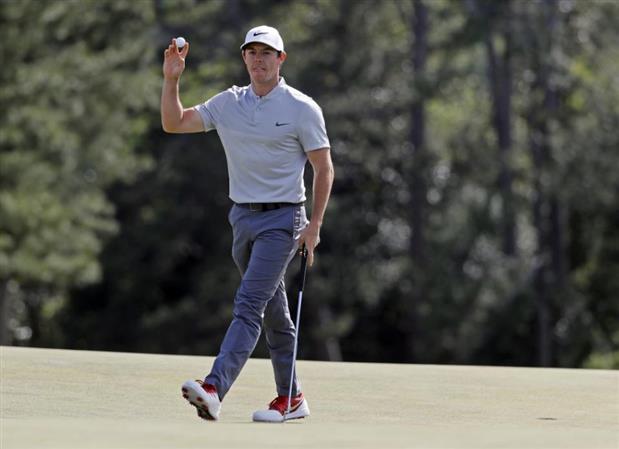 Rory McIlroy, of Northern Ireland, holds up his ball after putting out on the 18th hole during the second round of the Masters golf tournament Friday, April 8, 2016, in Augusta, Ga. (AP Photo)

Augusta: Golf fans can look forward to the tantalising prospect of world number two Jordan Spieth and third-ranked Rory McIlroy continuing their battle for Masters glory in the final pairing in Saturday's third round.

This week's Masters had the makings of being extra special with every player in the world's top six in good form during the build-up and defending champion Spieth and four-times major winner McIlroy now occupy the top two spots on the leaderboard.

Spieth, seeking his third major title, has led after each of the first two rounds while McIlroy soared into contention with a superb one-under-par 71 on Friday when the challenging Augusta National layout was made even more difficult by gusting winds.

"Just both seem to be on our games right now and obviously really focused on this week with a lot of fantastic players behind us.

"There's the potential tomorrow for someone to shoot a few under (par) and move up into the lead from outside the top 25. There's a potential for that with what I saw on the last six holes today, the way the course was playing."

"A gust from one direction when you think it's going to be the other can throw a two-footer at this speed almost out of the hole," said Spieth, who is widely regarded as the best putter in the game.

"So trying to really stay down and grind on those putts was challenging. It was very tough. I knew that even par was still a good score," he said, referring in particular to the back nine.

Spieth, who completed a stunning wire-to-wire victory by four shots at Augusta National last year, battled through an adventurous round on Friday that included four birdies, four bogeys and a double at the par-four fifth.

"Dropped a few, but all in all still in the lead," he said. "A good save at the last to kind of have a putt to see go in. But boy, that golf course changed very much throughout the day today."