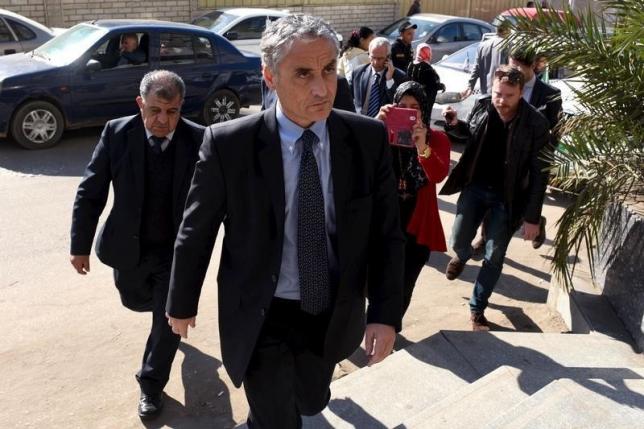 Rome: Italy recalled its ambassador to Egypt for consultations on Friday after Egyptian investigators in Rome failed to provide evidence needed to solve the mystery of the murder of an Italian student in Cairo.

Ambassador Maurizio Massari was called to the capital for "an urgent evaluation" of what steps to take to "ascertain the truth about the barbaric murder of Giulio Regeni", the Foreign Ministry said in a statement.

Egyptian authorities met with Rome prosecutors on Thursday and Friday, handing over some, but not all, of the evidence Italy had requested.

The prosecutors said in a statement Egyptian investigators had still not handed over such evidence as details from Cairo cell towers that had connected to Regeni's mobile phone.

Regeni, 28, vanished from the streets of Cairo on Jan. 25. His body was discovered in a ditch on the outskirts of the Egyptian capital on Feb. 3, showing signs of extensive torture.

Regeni's mother said last week that her son's body had been so disfigured that she had only been able to recognize him by the tip of his nose.

Human rights groups have said the torture indicates he was killed by Egyptian security forces, an allegation Cairo has repeatedly denied.

"Recalling the ambassador for talks means that Italy confirms its commitment with itself and the Regeni family: We will stop only before the truth, the real truth," Renzi told reporters on Friday, adding that Italian prosecutors said this week's meetings had been "disappointing".

Italian officials have openly ridiculed different versions of Regeni's death put forward by Egyptian investigators, including an initial suggestion that he had died in a traffic accident.

Last month, Egyptian police said Regeni's belongings, including his passport, had been found in the possession of a band of thieves that were killed in a shootout with Egyptian police.

Italy's move to escalate the diplomatic dispute is likely to further strain relations between the two countries, and it is a setback for Renzi's diplomatic efforts to make Italy the main European partner for Egypt.

Egypt will "assess in a comprehensive manner" the situation when its investigative team returns home, Foreign Ministry spokesman Ahmed Abu Zeid said in a statement.

Egypt had not yet been officially notified of Italy's move to recall its ambassador, nor for "the reasons behind this decision", he said.

Renzi had offered to be "a bridge" to Europe when Egyptian President Abdel Fattah al-Sisi visited Rome in 2014, saying the two countries were strategic partners in the Mediterranean for fighting Islamist militants and combating people smuggling.

Apart from common political aims, Italy has significant economic interests in Egypt, including the giant offshore Zohr gas field, which is being developed by Italy's state energy producer Eni.

A delegation of Italian businessmen led by then-Industry Minister Federica Guidi cut short a visit to Cairo and returned home when Regeni's body was recovered in February.