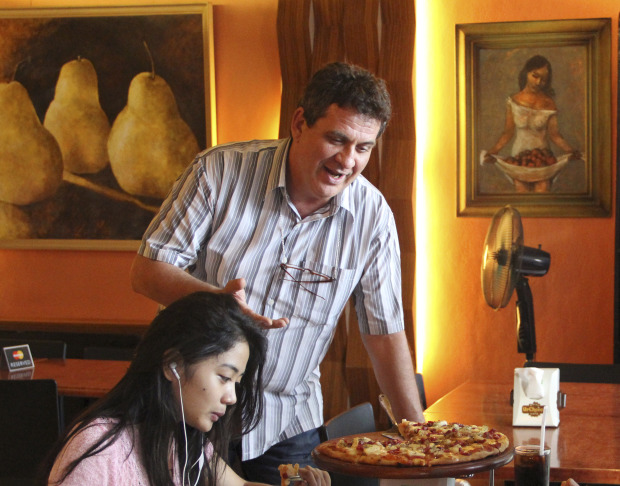 Zamboanga, Philippines: A retired Italian priest held hostage for six months by suspected Islamic militants left a Philippines hospital on Saturday a day after his release, looking frail though officials said he was in good health.

A thin Rolando Del Torchio waved to journalists as he walked to a waiting ambulance after spending the night in a military hospital in the southern port of Zamboanga, an AFP video journalist said.

"The victim is emaciated. He has lost a lot of weight compared to what we saw in his old pictures," regional military spokesman Major Filemon Tan told reporters.

"He is okay otherwise."

The Italian was held captive by the Abu Sayyaf group after armed men snatched the then 56-year-old at gunpoint at his pizza restaurant in the southern city of Dipolog in October last year.

"The ASG was behind this kidnapping," Tan said, referring to the group by its initials.

It was not clear where Del Torchio was headed, but the military spokesman said the Italian embassy had arranged for a chartered plane to fly him out of Zamboanga.

Calls by AFP to the Italian embassy in Manila went unanswered.

The authorities found Del Torchio late Friday aboard a ferry docked on the remote southern island of Jolo, the main Abu Sayyaf stronghold some 950 kilometres (590 miles) south of Manila.

The Abu Sayyaf is a small group of Islamic militants infamous for kidnapping foreigners and demanding huge ransoms, as well as for being behind deadly bombings in the mainly Catholic Asian nation.

Tan said he did not know if any ransom was paid to secure Del Torchio's release.

Del Torchio had worked as a missionary for the international organisation PIME in the south from 1998 before retiring in 2000 to set up his restaurant, colleagues told AFP shortly after he was abducted.

The gunmen are holding nearly 20 other foreign hostages, all but one of them abducted since 2014.

The Abu Sayyaf last month posted a video of two Canadians, a Norwegian and a Filipina they kidnapped in September last year and set an April 8 deadline for ransom to be paid or the foreigners would be killed. The deadline passed Friday with no word on their fates.

The latest groups of victims were 10 Indonesian and four Malaysian crew members snatched over the past two weeks from a tugboat and a cargo ship near the southern Philippines.