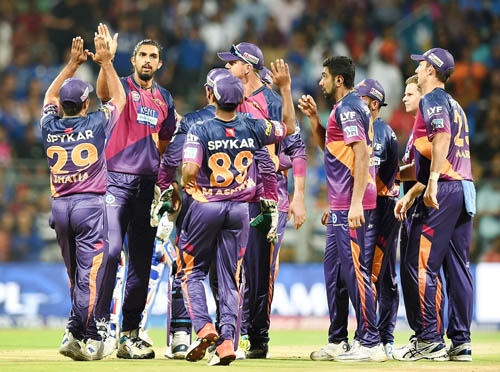 MUMBAI: Rising Pune Supergiants made a sweet start to their life in the Indian Premier League, their seamers waylaying Mumbai Indians’ top order to set up a breezy nine-wicket win over the defending champions.

Chasing 122, they got there with 32 balls to spare, Ajinkya Rahane steering them home with a fluent unbeaten 66 off 42 balls.

The pitch had lost most of its early bite when Supergiants batted, and Rahane quickly got into the groove with a pair of straight-driven fours off Mitchell McClenaghan in the first and third overs of the innings.

Any residual chasing nerves Supergiants may have had dissipated in McClenaghan’s third over - the fifth of the innings - when both Rahane and Faf du Plessis picked up sixes off mis-hits.

Nonetheless, Supergiants were well on their way, and the openers put on 78 before Du Plessis played on to Harbhajan Singh.

It left the rest of the batting a mere 44 to get from 62 balls, and Kevin Pietersen hastened their passage home with a couple of monster sixes off Harbhajan. The 15th over began with Supergiants needing eight to win, and Rahane finished the game with two boundaries of four balls, clubbing Hardik Pandya to the long-on boundary before ramping him for six over the third man boundary.

The season began on a Wankhede Stadium pitch dissimilar to the easy-paced, hit-through-the-line surfaces offered up during the World T20, and Mumbai, after deciding surprisingly to bat first, struggled against the seam movement and bounce.

They only got as far as 121 because Harbhajan climbed into Pune’s bowling at the death, clubbing an unbeaten 45 of 30 balls and scoring the bulk of the 41 runs Mumbai made in the last three overs.

Till his intervention, they seemed to be struggling to even get to 100. Ishant Sharma, getting the ball to nip around and climb on the batsmen, and Mitchell Marsh getting late swing away from the right-handers, reduced them to 30 for four by the end of the fifth over.

Tt became 40 for five when Rajat Bhatia trapped Kieron Pollard leg-before with an off cutter in the eighth over.

Apart from helping the quicker bowlers, the pitch was also offering Bhatia grip, and Mumbai struggled for rhythm against his stump-to-stump mix of cutters and slower balls. He finished with figures of one for 10 from his four overs.

Shreyas Gopal, who made two off 16 balls, faced nine balls from Bhatia and failed to score of any of them.

Gopal’s stay at the wicket came to an end when he holed out to long-off off the bowling of M Ashwin, the debutant leg spinner.