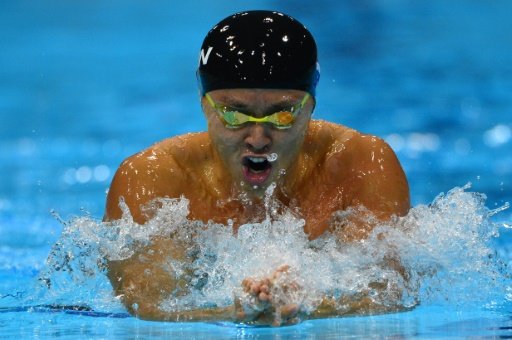 Arguably the greatest breaststroker of all-time, Japanese swim king Kosuke Kitajima insisted there would be no flip-flopping on his decision, made 48 hours earlier after failing to qualify for his fifth Olympics in Rio this summer. (AFP Photo)

Arguably the greatest breaststroker of all-time, the 33-year-old insisted there would be no flip-flopping on his decision, made 48 hours earlier after failing to qualify for his fifth Olympics in Rio this summer.

"But I knew sooner or later the day was coming. I've been lucky enough to compete for a long time and have a happy career. There will probably be a hole in my heart where swimming once was but I've got no regrets.

"It's disappointing not to be able to go to Rio," added Kitajima on the final day of the national championships, which doubled as Japanese Olympic trials.

"It's my own fault I couldn't get there. I'm deeply sorry to let down everyone who believed in me and supported me."

Kitajima finished fifth in Friday's 200m, having already missed out in the 100m earlier in the week, as heir apparent Yasuhiro Koseki and 19-year-old Ippei Watanabe booked their spots in Rio to mark a changing of the guard.

"This competition has shown me I'm no longer at that level where I can take on the world," he said. "I wish the 2020 Tokyo Olympics had come a little earlier for me but I hope the new generation of swimmers can carry the flag."

Kitajima, a three-times world champion who smashed several world records during his illustrious career, had flirted with retirement after his stunning performance at Beijing in 2008 when he retained his Olympic titles, an unprecedented achievement in his event.

But after moving to California the Tokyo native was coaxed back into the pool and returned to claim a silver medal in the 4x100m relay at the London Olympics four years ago.

Asked to pick a career highlight, Kitajima suggested his 100m gold in Beijing where he set a world record to beat Norway's Alexander Dale Oen.

"He was so strong," recalled Kitajima. "To be able to swim that race despite not being 100 per cent confident of winning was very satisfying. But I even remember the races I lost when I was at elementary school."

Japan's most decorated swimmer and a huge celebrity in his home country, Kitajima served notice of his talent as a 17-year-old with a fourth-place finish in the 100m final at the 2000 Sydney Olympics.

But he shot to global fame at the 2004 Athens Games, when he twice beat fierce rival Brendan Hansen and memorably celebrated by pointing at the American and whooping: "I kicked his butt!"

Asked what he had said to pop star wife Chisa Maekawa about his decision to hang up his goggles, Kitajima shrugged.

"Nothing in particular," he said. "But she did say she will be sad not to be able to watch me anymore -- and asked me what I was going to do with myself."