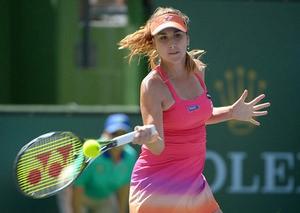 Belinda Bencic (SUI) during her match against Magdalena Rybarikova (SVK) at the BNP Paribas Open at the Indian Wells Tennis Garden. (Reuters Photo)

Bern: Switzerland's No. 1 Belinda Bencic has withdrawn due to a back injury from a Fed Cup semifinal against defending champion Czech Republic next weekend.

The Swiss tennis federation says the 10th-ranked Bencic must rest for at least four weeks.

The 19-year-old Bencic carried the injury since playing at Indian Wells last month and lost her first-round match at the Charleston tournament last week.

Switzerland hosts the Czechs next Saturday and Sunday on indoor hard courts at Lucerne.

Swiss Tennis says captain Heinz Guenthardt has yet to decide whether to call up a replacement in a team that includes top-ranked doubles player Martina Hingis.

The Czechs, winners of four of the last five Fed Cup titles, will also be without its top-ranked player - two-time Wimbledon champion Petra Kvitova.