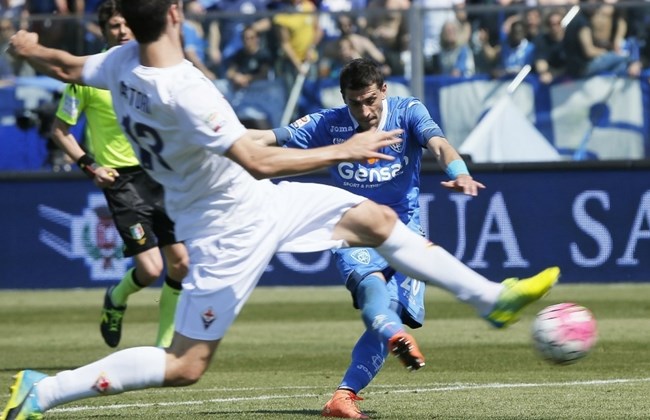 Milan: Goals from Manuel Pucciarelli and Piotr Zielinski ended Empoli's nearly two-decade wait to beat Fiorentina in a 2-0 home win on Sunday that could place further doubts on the future of Viola coach Paulo Sousa.

Empoli had not beaten Fiorentina home or away since 1997, but after Pucciarelli's 41st minute strike the hosts thwarted a second-half fightback by the visitors and wrapped up the points when Zielinkski struck two minutes from time.

Empoli moved up three places to 11th although Fiorentina's sixth game without a win has dented their Europa League hopes in the week Sousa, in his first season at the club, was reported to have met representatives from a Russian league side.

Marco Giampaolo said his side's "emotional" win had just about secured their top flight survival, telling Sky Sport: "It's a hugely satisfying win that just about keeps us up for next season.

"A derby win is always emotional, especially when it comes against such a top side as Fiorentina."

Representatives from Zenit Saint Petersburg were reportedly in attendance at the Castellani stadium as rumours mounted that Sousa had met in midweek with the club.

But he told Sky Sport: "It's normal for scouts or sporting directors (from other clubs) to travel to other games."

Sousa admitted Fiorentina's poor run of form was "worrying", but said club president Andrea Della Valle "has confirmed he wants me to remain at the club".

"Now we have to get back to winning ways, like we were at the start of the season."

Fiorentina remain in fifth place, 20 points behind leaders and champions Juventus but are now in danger of slipping to 10 points behind Roma, who occupy the third and last Champions League place, before the Giallorossi host Bologna on Monday.

A 2-1 win over AC Milan on Saturday allowed Juventus to open up a nine-point gap on title rivals Napoli, who will look to reduce the gap to six points later Sunday at home to Verona.

Empoli, based 30km from Florence, last beat La Viola in 1997 and managed only four draws from 14 outings against their local rivals since.

But Empoli hit the visitors against the run of play when Facundo Roncaglia's poor clearance fell to Pucciarelli, who thwarted a challenge from Gonzalo Rodriguez to slide in and beat Ciprian Tatarusanu from the edge of the box.

Fiorentina spurned a quick chance to level when Nikola Kalinic's header sailed just over the bar, and Pelagotti did well to palm Ilicic's curler round the post.

Empoli should have doubled their lead on 53 minutes when Riccardo Saponara scuffed wide following Pucciarelli's dummy.

Fiorentina fought back, but Mauro Zarate fired straight at Pelagotti and Kalinic was flagged offside when he had the ball in the net on 67 minutes.

A spectacular scissor-kick from Marco Alonso went wide of the far post and the full-back saw another effort charged down.

Those misses proved costly when, two minutes from time, Zielinski pounced on the rebound from Tatarusanu's save from Pucciarelli to beat the keeper at the far bottom corner.