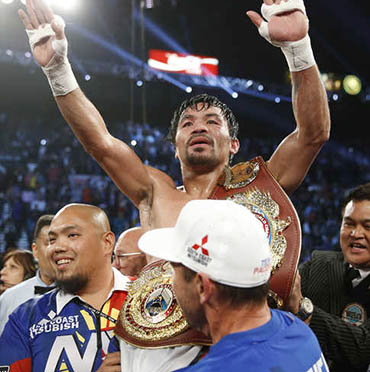 Las Vegas: Manny Pacquiao scored an emphatic victory over American Tim Bradley here on Saturday, sealing his 21-year professional career with a vintage performance in his farewell to boxing.

Pacquiao, fighting for the first time since his defeat to Floyd Mayweather last May in the “Fight of the Century”, knocked down Bradley twice on his way to a comfortable unanimous decision.

The judges’ scorecards at the MGM Grand Garden Arena told the story of Pacquiao’s dominance in the non-title welterweight duel, with the 37-year-old eight-division world champion winning by identical margins of 116-110 on all three cards.

Pacquiao had insisted Saturday’s bout – the 66th of his career – will be his final fight before he concentrates on his political career in the Philippines, where he is seeking election to the Senate next month.

Many ring-watchers however are sceptical, believing he may well be tempted to extend a career which has seen him earn more than $500 million.

Asked afterwards if he planned to stay retired, Pacquiao replied: “I think so. I’ve made a commitment to my family that I’m going to retire after this.

“Maybe I enjoy being a retired man, serving the people, helping the people,” added, before giving a farewell message to his fans. “Thank you to all the fans in boxing, especially the Filipino people. I’ve really appreciated all your help and support.”

Pacquiao had promised an explosive performance and was as good as his word for long periods, uncorking some trademark combinations to overwhelm Bradley. “Bradley is a good boxer, he’s a champion, he’s a man. It was not easy tonight,” Pacquiao said, shortly before a warm embrace in the ring which concluded with the two fighters arranging to meet for breakfast on Sunday.

“He used his experience against me, his ability and he won the fight tonight...I’m in there with a special man, Manny Pacquiao.”

A cagey opening round had the feel of a tactical battle, with Bradley carefully keeping his distance as he circled the marginally more aggressive Pacquiao, who threw 33 punches to Bradley’s 19.