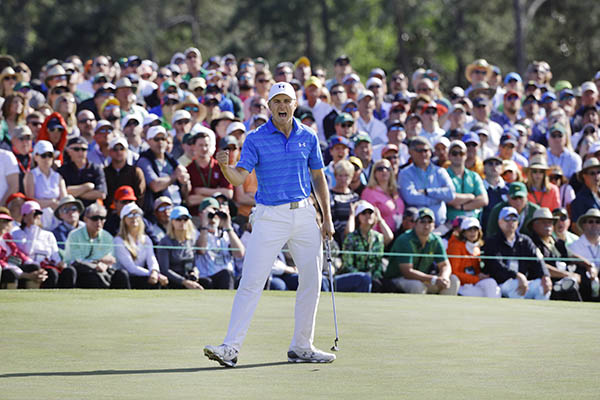 AUGUSTA, Georgia: Jordan Spieth, bidding for a second consecutive wire-to-wire win at the Masters and another slice of golf history, extended his overnight lead to a commanding five shots midway through the final round early this morning.

The 22-year-old, aiming to become only the fourth player to claim back-to-back Green Jackets, was his usual unflappable self as he mixed five birdies with a lone bogey to reach the turn in four-under 32 at a sun-bathed Augusta National.

That left the reigning Masters and US Open champion at seven under overall, with Englishman Danny Willett, after 12 holes, alone in second place.

Should runaway leader Spieth go on to triumph, he would become the second youngest player in the modern era to win three major titles with only Gene Sarazen ahead of him. Dane Soren Kjeldsen, after 12 holes, and long-hitting American Dustin Johnson, after 10, were a further stroke back at one under in the year’s opening major championship.

After three rounds of strong gusting winds, the players were greeted by the coldest temperatures of the week but the calmest conditions as the final round got under way with an abundance of compelling possible storylines in the melting pot.

Spieth and his playing competitor, PGA Tour rookie Smylie Kaufman, each birdied the par-five second for the tournament leader to remain a stroke in front before he was handed a two-shot advantage when Kaufman bogeyed the tricky par-four third.

Kaufman also faltered at the par-three fourth, where he three-putted from long range, while world number two Spieth sank a clutch putt there from 12 feet to move three ahead.

Watched by massive galleries, Spieth bogeyed the brutal par-four fifth after his second shot went over the back right of the green but rebounded with a 15-foot birdie putt at the par-three sixth to get back to four under and two ahead.

The American hit a superb approach at the par-four seventh, his ball pitching well beyond the pin before spinning back to three feet, then knocked in the putt to forge three strokes in front.

Further birdies followed for the brilliant Spieth at the par-five eighth, where he was just short of the green in two and pitched up to three feet, and at the ninth, where he coaxed in a curling 21-footer, as he stormed five ahead.

Englishman Matthew Fitzpatrick was among the early starters and signed off with a five-under 67 to hold the clubhouse lead at level-par 288.