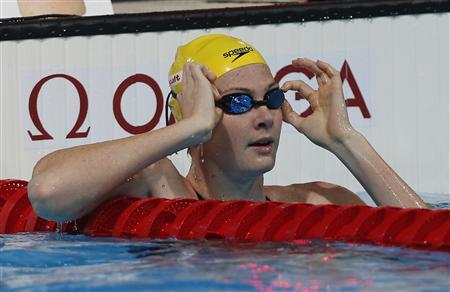 Australia's Cate Campbell checks her time after finishing second in her women's 100m freestyle semi-final during the World Swimming Championships at the Sant Jordi arena in Barcelona August 1, 2013. (Reuters Photo)

Melbourne: Former 100 metres freestyle world champion Cate Campbell is carrying a strained wrist through Olympic trials in Adelaide this week after injuring it during an 'aggressive' nap.

The 23-year-old, who won gold with Australia's 4 x 100m freestyle team at the 2012 London Games, said she had bent her wrist backwards twice while sleeping, causing damage to a joint.

"I am an aggressive napper," Campbell told local media.

"I woke up the first time and the wrist was sore then somehow I did it again -- that did it.

"More rest should do it a lot of good".

Campbell still managed to qualify fastest for the 100m freestyle final at the national trials and will take on her sister Bronte in the decider on Tuesday.

The Campbell sisters' rivalry has lit up the women's pool, with the younger Bronte snatching Cate's 100m world title at Kazan last year.

The pair became the first Australian siblings to qualify for the same Olympic event at the London Games and will hope to repeat the trick for Rio by finishing in the top two at the South Australia Aquatic and Leisure Centre on Tuesday.

They share an intense but friendly rivalry and Bronte, who qualified third fastest for the final, enjoyed a good-natured dig at her sister's injury woes.

"She is pretty talented to be able to injure herself while asleep," Bronte said.

"Even when she is not doing anything she is hurting herself."