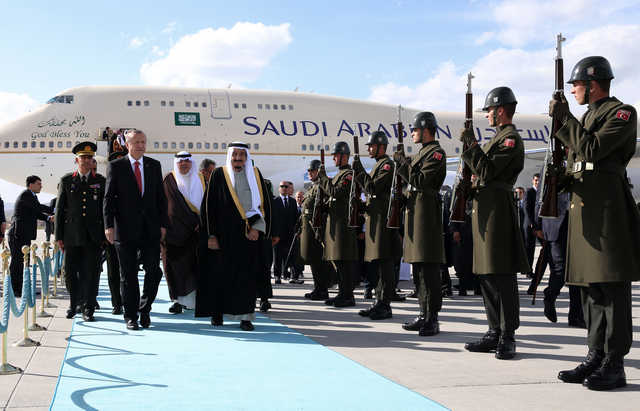 Saudi King Salman arrived in Turkey on Monday for a visit aimed at tightening increasingly close ties between the two overwhelmingly Sunni Muslim allies, receiving a lavish welcome that underlined the strength of relations.

The 80-year-old king was welcomed at Ankara airport by a delegation personally led by President Recep Tayyip Erdogan, in an unusual break from protocol and showing the importance Turkey attatches to the visit.

Television footage showed the king, wearing black sunglasses, serenely descending from the plane with a special escalator rather than steps before being welcomed by Erdogan.

King Salman is expected to hold talks on Tuesday at Erdogan's presidential palace in Ankara expected to focus on the Syrian conflict and the fight against militants.

Salman will then attend the Organisation of Islamic Co-operation (OIC) summit in Istanbul on Thursday and Friday after wrapping up talks in the Turkish capital.

Local media reported that he will stay in Ankara in a 4,850sqft hotel suite, with bullet proof windows reinforced by bomb-resistant cement.

A 300-person Saudi delegation had earlier arrived in Ankara to coordinate the king's accommodation and deal with security issues, the Hurriyet newspaper said.

Five hundred luxurious Mercedes, BMW and Audi cars had been hired for the king's transport in Ankara and Istanbul, it added. The king's personal belongings had all been shipped to Turkey in cargo planes.

Saudi Arabia and Turkey have forged close alliance after their relationship had been damaged by Riyadh's role in the 2013 ousting of Egyptian president Mohammed Morsi, a close ally of Ankara.

Ankara and Riyadh have cooperated closely over the five-year Syrian war. Both back rebels who are seeking to remove Syrian President Bashar al-Assad from power and see his exit as essential to ending the war.

In February, Saudi jets arrived at Incirlik air base in southern Turkey to join the air campaign against Islamic State jihadists.

Turkey will take over the OIC's rotating presidency from Egypt at the Istanbul summit, which is seen as a new bid by Erdogan to showcase Turkey's influence in the Islamic world.