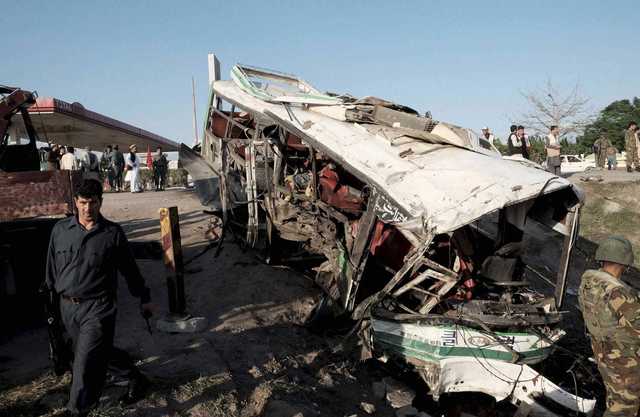 Afghans and security forces inspect damage to a bus after a suicide attack in Jalalabad east of Kabul, Afghanistan. (AP Photo)

At least 12 people were killed and dozens wounded Monday when a Taliban suicide bomber attacked a bus carrying Afghan army recruits near the eastern city of Jalalabad, officials said.

It came days after US Secretary of State John Kerry paid a visit to Kabul to underscore his support for Afghanistan's beleaguered unity government and call on the insurgent group to resume direct peace talks.

Ministry of Defence spokesman Dawlat Waziri confirmed the incident and death toll, adding the attacker struck the bus while riding a motorised tricycle.

"The recruits were being transferred from Jalalabad to Kabul," Waziri said, putting the number of injured at 26.

Ehsansullah Shinwari, head of a regional hospital in Nangarhar province, said 38 people were hurt in the bombing.

Speaking from the hospital, Ahmad, who only uses one name, said that his father and two brothers were killed in the attack.

At the site of the blast, bloodied clothes and personal belongings were strewn on the ground around the badly charred remains of the bus.

Taliban spokesman Zabihullah Mujahid later claimed responsiblity on his verified Twitter account. The group have been waging a revolt against the government since being toppled from power in 2001, frequently targeting the military.

They have stepped up their campaign following the 2014 withdrawal of US-led combat troops, winning a number of important military victories including the brief capture of northern Kunduz city last September.

Afghanistan, the US, China and Pakistan in January formed a four-way group to try to jump-start peace talks that were first held in Islamabad last July but fell away after it emerged later that month the Taliban's founder Mullah Omar was dead, leading to infighting within the group.

But the Taliban have refused to return to the negotiating table until their conditions are met, including the departure of 13,000 foreign soldiers who are on a mission to train and advise their Afghan counterparts.

Omar's successor Mullah Akhtar Mansour meanwhile is seen as rapidly consolidating his authority over dissident factions and has announced he is preparing for "decisive strikes" this spring.

The Syria-headquartered Islamic State group has also gained a foothold in Nangarhar province in recent years.

Brigadier General Wilson Shoffner, a spokesman for the US-led military operations in Afghanistan, said in March the group was mainly contained in one district of the province.

Many of them are former Pakistani Taliban fighters who "have changed allegiance to Da'esh," Shoffner said, referring to the group by its Arabic acronym.