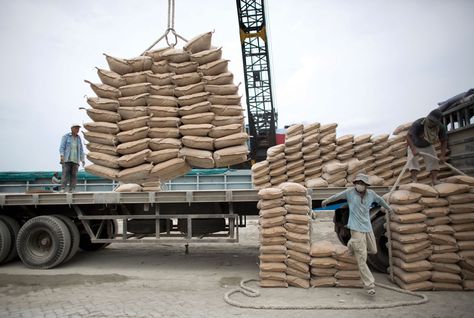 Khobar: Saudi Arabia has lifted a ban on exporting cement, the deputy head of the Saudi national committee of cement companies was quoted as saying by a local newspaper on Tuesday.

Ahmed bin Abduh Zugail, who is also the chief executive of Yanbu Cement Co, told the Al Riyadh newspaper that cement companies welcomed the move but were awaiting details of the new rules from the Ministry of Commerce.

Shares in cement companies jumped on the news, with the cement index trading 5.1 percent higher at 1010 GMT. Southern Province Cement Company and Saudi Cement, the two largest cement firms by market value, were up 6.1 percent and 4.9 percent respectively.

New activity in the Saudi construction sector has slowed in recent months as a slump in oil prices has pushed the government to cut spending on non-essential projects. Worker protests over unpaid wages, rare in a kingdom that tolerates no public dissent, have also become increasingly common.

A separate newspaper report in November said the government was considering lifting the ban to ease oversupply within the local market.

The Saudi government imposed a ban on cement exports in 2008 to push prices down and accommodate demand from large government-funded infrastructure projects, although some companies were allowed to export at prices lower than those in the local market.

Mohammed Alomran, a member of the Saudi Economic Association, told Reuters: "It seems the surrounding countries have a slowdown too, while Yemen is still not stable to be rebuilt. But the cost of transportation by land is very expensive and may not be feasible."

"The companies which will likely benefit from the reported lift are those close to the sea as marine transportation is cheaper," he said.