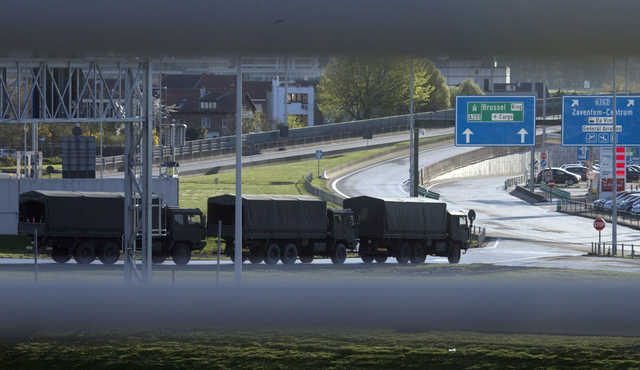 Military vehicles block a main road to Zaventem Airport in Brussels on Tuesday. A wildcat strike of air traffic controllers has paralyzed Brussels airport after their guild rejected a compromise aimed at solving a conflict over a pension reform. The strike action comes at a time when traffic was already reduced at the airport in the wake of the March 22 attacks

Belgium has charged two new suspects over last month's Brussels airport and metro bombings and made three fresh arrests in the probe into the November Paris attacks, prosecutors said.

Investigators have uncovered a tangled web of links between the Paris and Brussels attacks, with many of the same people involved and linked to the Islamic State (IS) group in Syria which claimed both.

The two suspects, named as Smail F and Ibrahim F, were "charged with participation in the activities of a terrorist group, terrorist murders and attempts to commit terrorist murders, as a perpetrator, co-perpetrator or accomplice," a statement from the prosecutors said.

It said there were "indications" the two men could be linked to the rental of an address in Brussels' Etterbeek district, which was raided last week and is not far from federal police headquarters.

At the time, police said they found nothing of interest but reports suggested that two other men – one of them Khalid El Bakraoui, who blew himself up at Maalbeek metro station in Brussels – may have stayed there, or used the address.

The second man, Swedish national Osama Krayem, was seen on CCTV with Bakraoui at a nearby metro station on March 22, and was apparently carrying a rucksack bomb.

Bakraoui then boarded the metro, travelling to Maalbeek station near the European Union headquarters district where he blew himself up.

Krayem was arrested last week and charged with terror offences.

Belgian media identified Tuesday's suspects as brothers Smail and Ibrahim Farisi who were said to have "cleaned" the Etterbeek apartment the day after the attacks.

It was not clear when the two men were arrested.

There is considerable speculation in Belgium that despite recent police successes, there could be more suspects still on the run.

The federal prosecutor gave no further details of the suspects, citing the need for secrecy in the investigation "which is continuing actively, day and night".

The airport and metro bombings killed 32 people in Belgium's worst terror attack which, like the November attacks on Paris, was claimed by the Islamic State (IS) group.

On Tuesday, Belgian police arrested another three people in a Brussels suburb during a new raid linked to the investigation into the Paris attacks, which left 130 people dead and hundreds wounded.

A statement from prosecutors said the trio were "held for questioning" after being detained in the Belgian capital's southern suburb of Uccle.

The investigating judge will decide Wednesday whether to continue holding the trio, it said, without giving any further details.

At the weekend, the prosecutor said the Brussels cell had originally planned another attack in France but that the arrest of Paris suspect Salah Abdeslam in Brussels on March 18, coupled with a series of massive police raids, made them decide to target Belgium instead.

Abdeslam, whose brother blew himself up during the assault on the French capital, had been due to do the same but backed out at the last moment, fleeing to Brussels where he hid until police caught him on March 18, not far from his family home in Molenbeek district.

Apparently reflecting their fears that the net was closing in on them, one of the Brussels airport bombers, Ibrahim El Bakraoui, left behind what the authorities described as a "will" on a computer in which he said he felt "hunted".

The other airport bomber was Najim Laachraoui, whose DNA was found on a suicide vest recovered at the Bataclan concert hall in Paris, where 90 people died.

The Belgian authorities gave no details of the planned attack in France.

Last month, French police arrested 34-year-old French national Reda Kriket on the outskirts of Paris, seizing weapons and explosives in a flat he used which prosecutors said showed he was planning an act of "extreme violence."

On Friday, police netted another key suspect: Mohamed Abrini, 31, the so-called "man in the hat" seen in CCTV footage at Brussels airport with two other bombers shortly before the attack.

Abrini grew up with Abdeslam in Molenbeek along with several other suspects, who all share a similar story of getting on the wrong side of the law and then becoming radicalised.

Critics say the authorities have not done enough to prevent extremism in areas such as Molenbeek, with Belgium proportionately the biggest source of foreign fighters travelling to Syria to join IS.

Meanwhile a Belgian newspaper published what it said was "the first photo" of a bearded Salah Abdeslam in prison.

The prison's administration has launched an enquiry into the leak of the photograph, Belgium's Belga news agency reported.