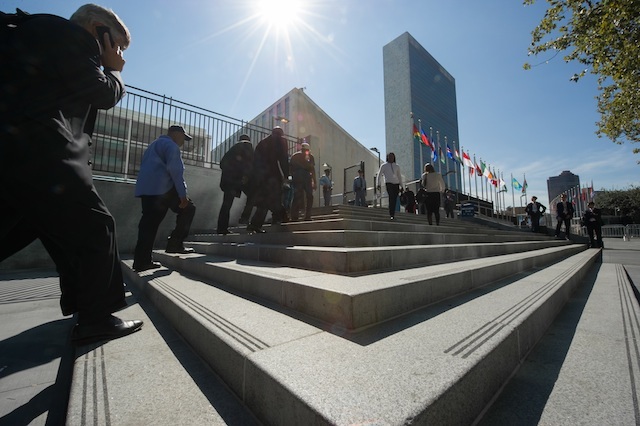 A view of the UN headquarters complex in New York

Candidates vying to become the next UN secretary-general fielded questions Tuesday on global crises – from climate change to achieving Middle East peace – during the first-ever hearings to choose the world's top diplomat.

The United Nations opened the three days of public hearings in a packed chamber, breaking from the secrecy that surrounded the choice of Ban Ki-moon and his predecessors at the helm of the world body.

Eight contenders will take turns at the podium before the General Assembly's 193 nations to lay out their vision for the top job after Ban steps down on December 31.

For decades, the choice of the UN chief has been firmly in the hands of the Security Council and its five permanent members – Britain, France, China, Russia and the US – in a process largely kept behind closed doors.

But the General Assembly last year voted to shake up the process, asking candidates to send a formal application letter, present their resumes and appear at hearings.

The final decision to nominate a candidate still rests with the Security Council, but the new openness could put some pressure on big powers to pick a nominee with broader appeal.

"If there is a critical mass of countries supporting one single candidate, I don't think we will see the Security Council coming up with quite a different name."

Montenegro's Foreign Minister Igor Luksic -- at 39, the youngest of the candidates – was up first, switching from English to French in an address that touched on his Balkan roots and ways to improve the UN bureaucracy.

Bulgaria's Irina Bokova, who heads the UN cultural agency UNESCO, said the UN should do more to combat violence against women and stressed the importance of gender equality.

Seen as Moscow's preferred candidate, the 63-year-old ex-foreign minister is considered a strong contender in the race that has could see the first woman chosen as secretary-general and the first eastern European.

Russia has said that the next UN chief should come from eastern Europe, the only region that has yet to be represented in the top post.

During the two-hour session, Bokova managed to steer clear of controversy and sought to portray herself as a candidate of continuity who would "serve" UN member-states.

On the Israeli-Palestinian peace effort, Bokova said she would work to "build trust and confidence" between the parties but stressed that on many complex issues she did not have "the magic bullet."

"You will see the new secretary-general serving you," Bokova said in her message to member-states.

In July, the Security Council will hold a first round of straw polls to measure support for the candidates.

Final polling is expected to take place in September, when the 15-member council will submit one nominee to the General Assembly, which is expected to endorse the choice.