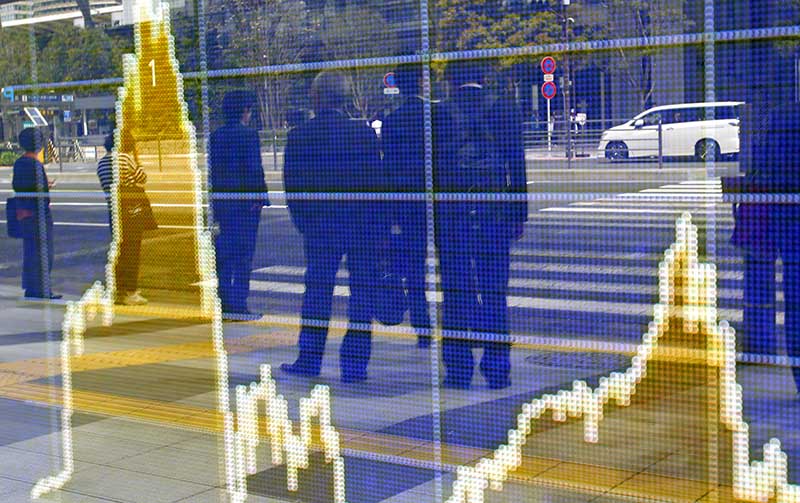 People are reflected on the electronic board of a securities firm in Tokyo ... global economy at risk

Washington: The International Monetary Fund warned yesterday of the risk of political isolationism, notably Britain’s possible exit from the European Union, and growing economic inequality as it cut its global growth forecast for the fourth time in a year.

In the run-up to its spring meetings in Washington this week, the IMF said chronic weakness had left the global economy vulnerable to shocks such as sharp currency devaluations and worsening geopolitical conflicts.

In its latest World Economic Outlook, the IMF forecast global growth of 3.2 per cent this year, compared with a downwardly revised forecast of 3.4pc in January. The growth estimate also was lowered in July and October of last year.

For 2017, the IMF said the global economy would grow 3.5pc, down 0.1pc point from its January estimate.

Its latest report cited a worsening spillover from China’s economic slowdown as well as the impact of low oil prices on emerging markets such as Brazil. It also highlighted persistent economic weakness in Japan, Europe and the US.

The gloomier picture sets the stage for the IMF and the World Bank to call this week for more co-ordinated global action to support growth.

In its report, the IMF warned that the rise of nationalist parties in Europe, the June 23 “Brexit” referendum, and anti-trade rhetoric in the US presidential campaign posed threats to the global economic outlook.

A British exit from the EU could do “severe regional and global damage by disrupting established trading relationships,” it said.

“We’re definitely facing the risk of going into doldrums that could be politically perilous,” said Obstfeld, who pointed to stagnant wage growth as fueling a growing sense of economic inequality that is spilling into the voting booth in many countries.

The IMF’s report and the gathering of officials and central bankers in Washington this week comes against the backdrop of widening rows in Europe over negative interest rates, a refugee crisis and how to shore
up Greece’s financial bailout programme.

Official negotiations over Greece’s bailout review have been idled during the IMF and World Bank meetings, but the debate over whether to provide more debt relief to Athens in exchange for further budget cuts is expected to continue on the sidelines.

Obstfeld repeated the IMF’s demand for a bailout programme that would put Greece on a path to sustain its debt and begin growing again, adding that there should be some flexibility to help its government deal with the massive numbers of refugees who have fled to Greece from war-torn countries.

The IMF yesterday cut Japan’s growth forecast for 2016 in half to 0.5pc. It said Brazil’s economy would now shrink by 3.8pc this year versus the previous forecast of a 3.5pc contraction, as Latin America’s largest economy struggles through its deepest recession in decades.

Meanwhile, the US, one of the relative bright spots in the global economy, also saw its 2016 growth forecast cut to 2.4pc from 2.6pc.

The IMF said it anticipated an increased drag on US exports from a stronger dollar, while low oil prices would keep energy investment weak.