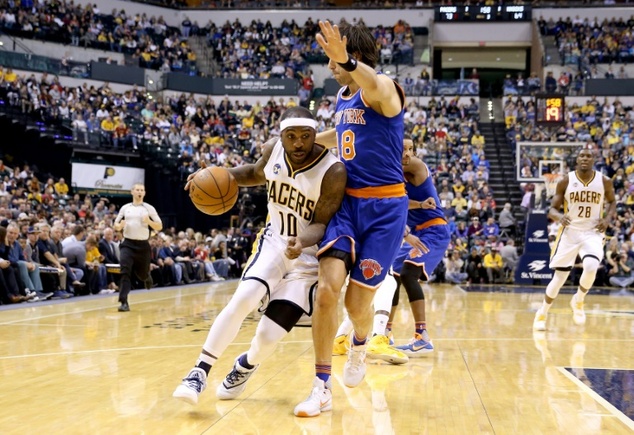 Los Angeles: The Indiana Pacers clinched the seventh seed in the Eastern Conference with a 102-90 victory over New York on Tuesday, avoiding a daunting opening postseason with Cleveland.

The Pacers win coupled with the Miami Heat's 99-93 victory at Detroit means Indiana will now play second seeded Toronto in the first round of the playoffs.

Detroit, who squeezed into the postseason at the expense of the Chicago Bulls, will face LeBron James and the Cavaliers.

Nineteen points each from Paul George and George Hill anchored the Indiana effort as the Pacers wrapped up a 26-15 record at home during the regular season, 44-37 overall.

"Teams hit their stride at different times in the season, and we were hoping to enter the playoffs with some momentum," said Indiana coach Frank Vogel, whose team travel to Milwaukee on Wednesday for their final game.

"We got a great game tonight from George Hill, who we ask to play his game and be aggressive. He does whatever he is asked."

New York's Derrick Williams top-scored for the Knicks with 21 points, while Jerian Grant chipped in with 18 and Arron Afflalo 13. The Knicks finished the season with a 32-50 record.

"The Knicks came out hot and negated what we were trying to do, but then our defensive pressure got better, and we were able to get control of the game defensively," George said. "In the second half, we got some stops and got some easy opportunities, a lot of transition plays."

"They were allowed to penetrate, and that created confusion in our defence and allowed them to get open scoring opportunities," Rambis said.

"Paul George got himself going, and a lot of that had to do with our execution."

Meanwhile in Michigan, the Pistons tumbled to defeat as Miami improved their chances of securing home-court advantage for the opening round of playoffs.

Leonard drained a jumper with 49 seconds left in the extra period to put the Spurs 100-98 ahead before Tony Parker added two free throws with 12 seconds to go.

The win saw the Spurs tie the 1985-86 Boston Celtics for most home victories in a single season in NBA history (40).

San Antonio's 66 wins is also a new franchise single-season record. The Spurs had already secured the second seeding in the Western Conference and complete their campaign on Wednesday against Dallas.

The Thunder, who rested stars Kevin Durant, Russell Westbrook and Serge Ibaka, will be seeded third in the Western Conference in the playoffs.