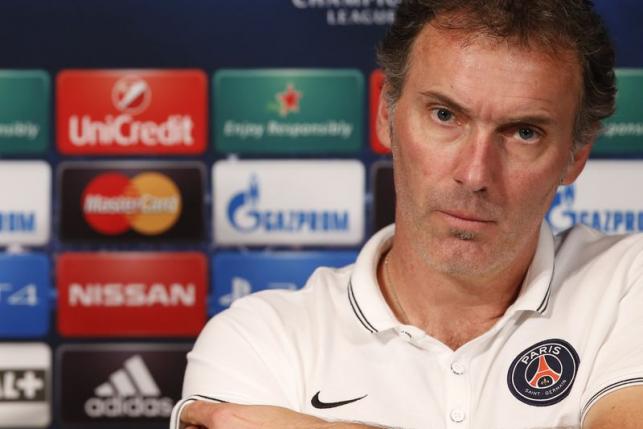 Manchester: Paris Saint-Germain got what they deserved as they were knocked out of the Champions League at the quarter-final stage by Manchester City on Tuesday, admitted coach Laurent Blanc.

Much-fancied PSG were eliminated at the quarter-final stage for the fourth campaign running after losing 1-0 to City at the Etihad Stadium to exit the competition 3-2 on aggregate.

"Over the two matches it is not exactly false," Blanc told beIN Sports when asked if the French champions had not been at their best.

"I think over the two games, especially this one, we tried to do what we wanted to do but maybe we just didn't have what was required.

"City are a very, very good team and we need to congratulate them, but I think we can be disappointed because we could and should have done better.

"City can be satisfied because they played with greater intensity in defensive phases and our big problem was that we didn't manage to score when we were on top in either leg and when that happens it's difficult to win a match."

Blanc sprang a major surprise by abandoning his usual 4-3-3 formation to play with three central defenders up against City's lone striker Sergio Aguero.

It was a move that failed miserably, with PSG never getting going even before losing Thiago Motta to injury late in the first half.

"We analysed things and we also took into account the suspensions of David Luiz and Blaise Matuidi," said Blanc, who was also without the injured Marco Verratti.

"We saw in the first leg that they have lively and fast players going forward and so we wanted to protect ourselves in the middle.