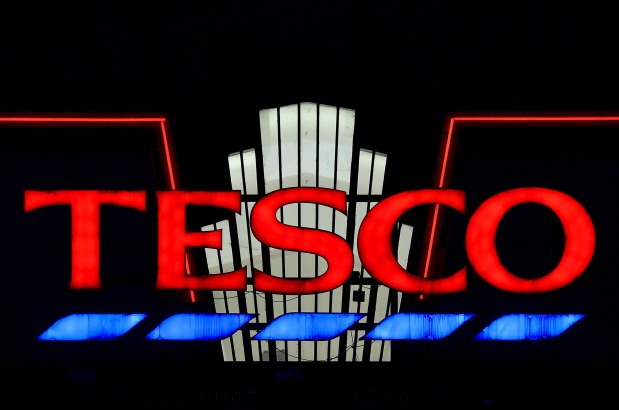 A Tesco supermarket seen at dusk in an 'art deco' style building at Perivale in west London, Britain. (Reuters Photo)

Pre-tax profits meanwhile stood at £162 million after a loss of £6.3 billion a year earlier.

Tesco hailed the "significant progress" as it returned to full-year profits, and also revealed the first quarter of sales growth for three years.

Like-for-like sales, which strips out the impact of new floor space, grew 0.9 percent in the group's fourth quarter. That was the first quarterly sales expansion since 2013.

"We have made significant progress against the priorities we set out in October 2014," said chief executive Dave Lewis in the earnings release.

"We have regained competitiveness in the UK with significantly better service, a simpler range, record levels of availability and lower and more stable prices.

"Our balance sheet is stronger and we are making good progress in rebuilding trust in Tesco and our investment case."

However, Lewis cautioned that the supermarket titan continues to face a "challenging, deflationary and uncertain market".

Tesco was rocked by crisis in October 2014 after overstating profits in an accounting error.

The group's performance has been also hit in recent times by increased competition in main market Britain, particularly from German-owned discount retailers Aldi and Lidl, but also from Asda, Morrisons and Sainsbury's.

In a bid to turn around its fortunes, Tesco appointed outsider and former Unilever executive Lewis in July 2014 to replace long-standing chief executive Philip Clarke.

Last year's record loss was sparked by £7.0 billion of one-off charges, mostly linked to a writedown on the value of its property.