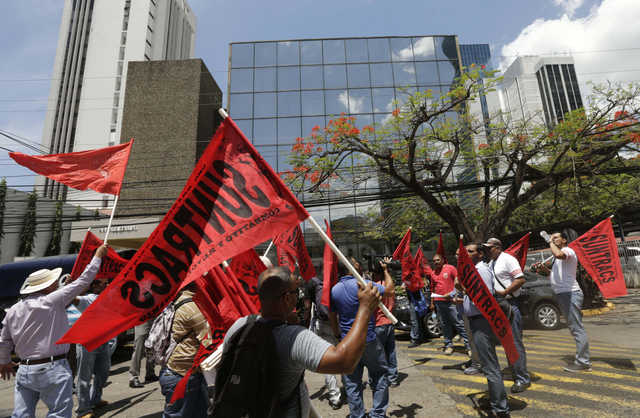 Tax authorities from the world's richest nations on Wednesday probed a mass of murky offshore dealings revealed in the huge Panama Papers data leak, just hours after police raided the law firm at the centre of the scandal.

"We are basically trying to get the bigger picture," Australian Tax Commissioner Chris Jordan, who proposed a joint investigation, told the Australian Financial Review business daily ahead of the gathering.

"It has never been tried on this scale before," Jordan added.

"A number of countries have got slices or pieces of the data and that's been very useful, but really, the start of the conversation is to work out who's got what, how we can pool that information and start to work together."

Australia convened the closed-door meeting in the French capital as chair of the Joint International Tax Shelter Information and Collaboration Network, which seeks to crack down on cross-border tax cheats.

The global network looking into tax havens is an initiative of the Paris-headquartered 38-nation advanced economies club, the Organisation for Economic Co-operation and Development (OECD).

"The meeting at the OECD presents tax administrations with a first opportunity to act on the considerable body of information revealed by the Panama Papers release," the OECD said in a statement in the run-up to the one-day gathering.

The tax officials gathered behind closed doors in Paris just hours after the Panamanian police's organised crime police raided the headquarters of Mossack Fonseca, which says its confidential documents were stolen in a computer hack.

Prosecutors said the raids at Mossack Fonseca's headquarters in Panama City and other branches had taken place "with no incident or interference," but gave no details on the results of the searches.

The world's business, political and even sports elite have been thrown onto the defensive by the findings of a year-long probe by a consortium of investigative journalists into leaked documents covering almost 40 years from around 214,000 offshore entities.

Although not illegal in themselves, offshore financial transactions may be used to hide assets from tax authorities, launder the proceeds of criminal activities or conceal misappropriated or politically inconvenient wealth.

Iceland's prime minister was forced to resign after it emerged he owned shares in the country's banks through an offshore company during the financial crisis.

Leaders in Britain and Ukraine have faced questions over their taxes, while Russian President Vladimir Putin has sought to divert attention from his entourage by claiming it is all a US plot against him.

China has been censoring online forums and media to stifle discussion of the papers, which showed relatives of eight of its political top brass also owned offshore companies.

And wealthy citizens in Australia, France, India, Mexico, Peru, Spain and elsewhere face probes over suspected tax avoidance after their names figured in some of the documents.

Panama has hit back at the apparent blemish on its image.

It has warned France of unspecified diplomatic measures if France does not remove it from a blacklist of tax havens.

Paris put Panama back on its national list of uncooperative jurisdictions, after removing it in 2012, in the wake of the leaks.

France is also urging the European Union and all OECD member states to follow suit.

Such an international designation would deal a heavy blow to Panama's vital financial services sector, which the government has been trying to make more transparent.

The European Union unveiled plans to force the world's biggest multinationals to faithfully report earnings and pay their fair share of taxes, saying the Panama Papers scandal demonstrated the need for change.

Its executive arm said that under the new rules, big companies operating in Europe would have to make public what they earn in each member state of the 28-nation bloc.

Country-by-country reporting has been a major demand of tax activists who accuse big corporations of secretly shifting profits to low tax jurisdictions, often using shell companies such as those exposed in the Panama Papers leaks.