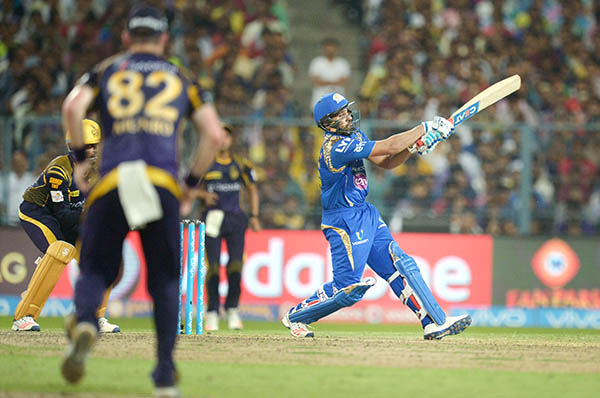 Kolkata: Skipper Rohit Sharma led from the front with a sparkling 84 as an inspired Mumbai Indians cruised to a six-wicket victory over Kolkata Knight Riders to open their account in an Indian Premier League match here yesterday.

Chasing a challenging target of 188 in the T20 match, Jos Buttler made the chase look easier, smashing his way to 41 off mere 22 balls and helped Mumbai Indians chase down the target with five balls to spare at the Eden Gardens.

Having stayed till the end, Sharma got his runs off just 54 balls, hitting 10 fours and two sixes in the process.

There was a time when Mumbai Indians were in a spot with 101 required from 59 balls as KKR kept on attacking with their spin strategy.

In a tactical masterstroke, MI’s think-tank promoted the left-handed New Zealand allrounder McClenaghan who turned it around with two successive sixes against Chawla and followed that up with another slog over midwicket against rookie Kuldeep Yadav.

The cameo brought the required run-rate down and calmed Sharma’s nerves and he also found fine support from Englishman Buttler who hit Russell for two sixes and one four in a 18-run 16th over to inch closer to the target.