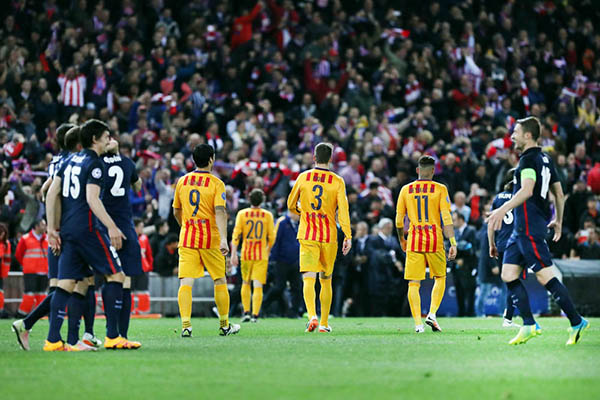 Barcelona crashed out after being stifled by a brilliantly well-organised Atletico and undone by two goals from Antoine Griezmann in a 2-0 quarter-final, second leg defeat.

Griezmann headed home from Saul Niguez’s exquisite cross to give the home side a deserved lead in the 36th minute before the Frenchman scored again from the penalty spot with two minutes remaining, following a handball from Andres Iniesta.

The result was a shining example of Atletico coach Simeone’s tactical astuteness as his side restricted Barcelona to very few chances.

While the visitors grew into the game in the second half, they struggled to create clear openings. Their best opportunity fell to Luis Suarez, the scorer of both goals in their 2-1 win in the first leg, but the Uruguayan could only shoot straight at Jan Oblak.

In what turned into a niggly encounter with numerous fouls as well as incidents of playacting and time wasting, Suarez risked getting sent off for elbowing compatriot Diego Godin, but was only shown a yellow card.

Barcelona also had Neymar booked for kicking out at Juanfran, while Atletico, whose players spent much of the second half berating the referee, had just captain Gabi booked.

Bayern Munich drew 2-2 at Benfica to reach the semi-finals for the fifth consecutive season with a 3-2 aggregate victory and remain on track for a treble of titles.

Bayern added another goal with a Thomas Mueller volley from a Javi Martinez header in the 53rd minute to knock out the Portuguese, who managed a late equaliser through Talisca.

Former European champions Benfica were vying for their first semi-final appearance in more than a quarter of a century but suffered their fourth elimination in their fourth European tie against Bayern.