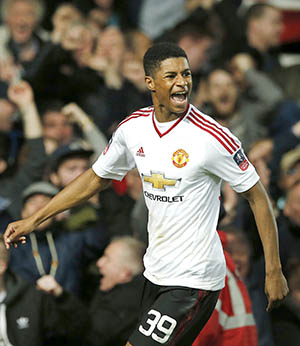 West Ham were bidding to crown the final cup tie at their venerable Boleyn Ground home with victory, having pushed United close at Old Trafford in the 1-1 draw when the teams first met.

But it was Van Gaal’s United, for whom Wayne Rooney returned to action after two months out with a knee injury, who advanced to a Wembley semi-final against Everton on April 23 courtesy of 18-year-old Rashford’s sixth goal of the season and a close-range Marouane Fellaini effort.

Having been under fire for several long months, Van Gaal now has a chance to finish a gruelling season by leading United to a first FA Cup triumph since 2004, which could yet keep him in a job.

West Ham, who set up a nerve-jangling last few minutes through James Tomkins’s header, must now seek to ensure that when United return for the last ever game at the Boleyn Ground on May 10, their dreams of Champions League qualification remain intact.

West Ham shared six goals with Arsenal in a gripping game on Saturday and they started this match with comparable abandon, Enner Valencia threatening and Dimitri Payet trying to catch David de Gea out with a cunningly disguised free-kick.

But West Ham’s eagerness to attack left them exposed at the back, particularly with converted midfielder Michail Antonio and the adventurous Aaron Cresswell at full-back, and as the visitors began to venture forward, they found unexpected space.

A clearance from Antonio found its way to Anthony Martial, who helped the ball on to Rashford, and the teenager applied further gloss to his gleaming reputation by shimmying inside Tomkins and planting a sumptuous finish in the top-right corner.

After De Gea had produced a razor-sharp save to thwart Antonio, Tomkins nodded in a knock-down from Andy Carroll with 11 minutes remaining to set up a rousing finale.