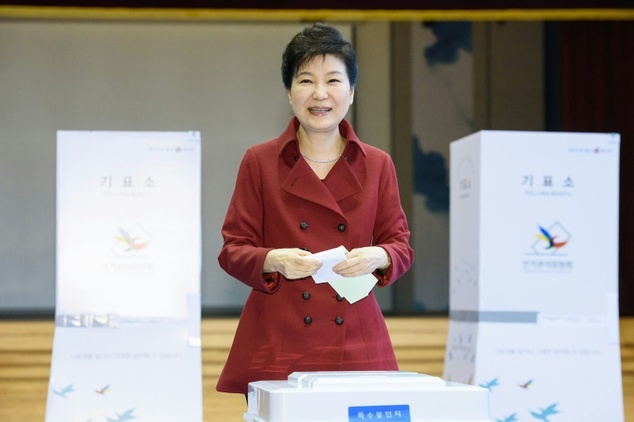 Seoul: South Korean President Park Geun-Hye's ruling conservative party was reeling on Thursday from a shock electoral defeat that broke its 16-year parliamentary majority and threatened its chances of retaining the presidential Blue House in 2017.

The crushing defeat leaves Park, who has less than two years left of her single, five-year term, as a lame duck leader and will weaken her ability to push through her conservative agenda, including labour reforms.

Pollsters had forecast an increased majority for the Saenuri, saying its hawkish stance towards North Korea would provide an electoral boost at a time of surging military tensions with North Korea.

But provocations by Pyongyang, including a nuclear test in January and a long-range rocket launch a month later, appear to have had little effect at the ballot box.

"This is the voters' judgement against President Park. All the pent-up anger they had about the worsening economy and widening inequality exploded in this election," said Choi Chang-Ryul, a politics professor at Yongin University.

Political power in South Korea is firmly concentrated in the presidency and Park has fallen short on most of her key economic promises, a failure she puts down to legislative inaction.

But critics accuse her of skewed priorities, poor decision-making and a dogmatic style of leadership.

Wednesday's defeat saw Park's Saenuri Party win just 122 seats in the 300-member chamber, sharply down from the 152 it held in the last parliament.

It marked the first time since 1999 the conservative party has lost control of parliament, with the three liberal opposition parties garnering a combined 167 seats.

The main liberal opposition Minjoo Party was the largest grouping, with 123 seats.

Losing the majority would mean projects such as labour reforms that critics have said would make it easier for businesses to fire workers would likely lose steam, said Jeong Han-Wool, senior fellow at the East Asia Institute.

"This miserable poll result will also greatly hurt the party's prospect for the 2017 presidential election," he added.

Party chief Kim Moo-Sung offered his resignation as leader to take responsibility for the rout.

The left-wing opposition had sought to frame Wednesday's vote as a referendum on Park's economic policies, with the jobless rate among those aged 15-29 at record levels.

Factional infighting and breakaways split the liberal vote, but the result represents a clear shift leftwards for the national assembly.

Under Park's presidency, annual economic growth in Asia's fourth largest economy has averaged around 2.9 % compared to 3.2 % under her predecessor Lee Myung-Bak.

Exports, which account for more than half of GDP, have fallen for the past 14 months consecutively, while household debt has soared to a record $1.0 trillion.