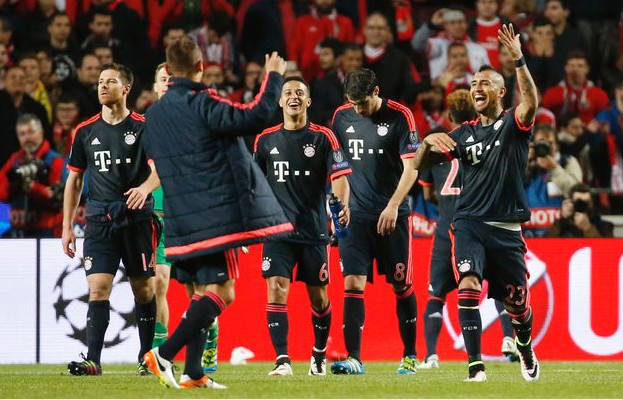 Bayern Munich manager Pep Guardiola is hoping his team can take the next step in the Champions League after booking a third consecutive semi-final spot under the Spaniard following Wednesday's 3-2 aggregate win over Benfica.

Bayern have now made it to the semi-finals of Europe's top club competition in five straight seasons but have not gone beyond that stage since Guardiola took over in 2013 following the Germans' treble-winning season under his predecessor Jupp Heynckes.

Guardiola will be leaving to join Manchester City at the end of the season and is feeling the mounting pressure of delivering the European trophy as his team eye another treble.

"We are now where we have been in the past two seasons," Guardiola said. "We are in the last four of the Champions League and the German Cup. I hope this time we can take that extra step."

Bayern, also closing in on a record-breaking fourth consecutive Bundesliga title with a seven-point advantage and five games left, are no strangers to European success, having won the Champions League in 2013 for their fifth European crown.

They also reached the final in 2010 and 2012 but have failed to do so under Guardiola, who won 14 titles including the Champions League in his four years at Barcelona.

"If you are in the last four in Europe then you definitely want more," said Bayern captain Philipp Lahm, who will be Germany's all-time leader in Champions League appearances if he makes his 104th match in the competition next month.

"A fifth semi-final appearance in a row is unbelievable. Performance-wise we are on a very good level but are not done yet. We do not have any title in the bag yet but it looks good in all three competitions."

Despite their run to the semi-finals where they will be drawn against Real Madrid, city rivals Atletico or Guardiola's future club City, Bayern have looked less dominant in recent weeks.

Goals are a bit harder to come by while their defence is not as waterproof as earlier in the campaign.

They let in just three goals in their six group stage matches but have conceded double that amount in the two knockout rounds since then.

"Nothing is gifted to you," said Bayern sports director Matthias Sammer. "Maybe we have been a bit away from our top level but we have a winner mentality. The team proved that against Benfica."