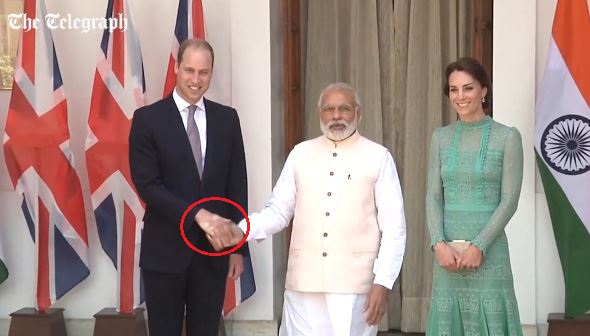 Such was the strength of Modi's embrace when he greeted the Royal couple, the Duke of Cambridge was left with a clear palm print on his right hand.

Prince William would have probably thought Narendra Modi was prime minister of more than a billion people as a firm handshake is a sign of strong leadership.

It could simply have been over-enthusiasm or a friendly gesture by Narendra Modi or it may also have been a show of authority.

Whichever it was, he certainly left an impression.

Modi likes to present himself as the assertive leader, and attempts to prove this physically: each year he completes two nine-day periods of fasting when he only takes fluids; his gait is reminiscent of a wrestler’s swagger; and during the last election campaign, Modi claimed to have a 142cm chest, like a bodybuilder such as Arnold Schwarzenegger.

The not-so-sophisticated style of his handshake raked controversies earlier too.

The techie was for some reason seen wiping his hands minutes after shaking them with Modi.

Modi met the Royal Couple on Tuesday as Prince Williams and Kate Middleton were hosted for lunch by the Indian prime minister.

They also discussed the controversy surrounding the winding up of operations by Tata Steel in Britain, which would leave 40,000 people associated with the steel manufacturing unit jobless.