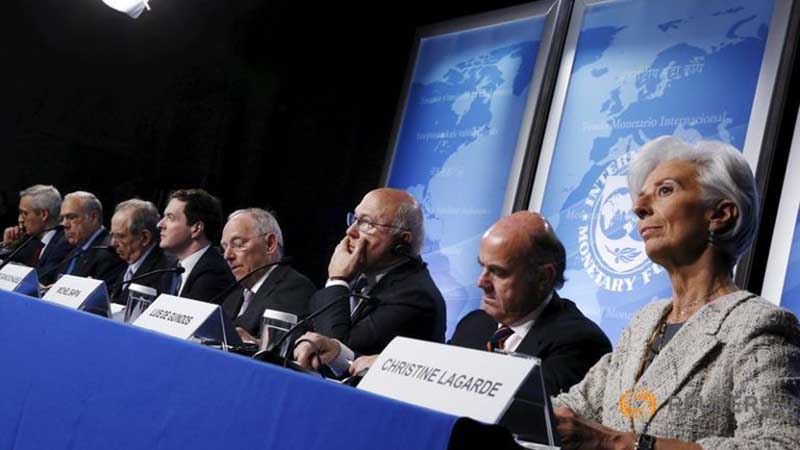 Washington: Financial leaders from the Group of 20 nations said yesterday they were heartened by a recent recovery in financial markets, but warned that global growth was “modest and uneven” and threatened by weakness in commodities-based economies.

In a communique issued after their meeting in Washington, G20 finance ministers and central bank governors said markets had recovered from the sharp sell-off earlier this year and were in better shape since they last met in Shanghai in February.

“However, growth remains modest and uneven, and downside risks and uncertainties to the global outlook persist against the backdrop of continued financial volatility, challenges faced by commodity exporters and low inflation,” they said.

The communique also pointed to Britain’s possible exit from the European Union, geopolitical conflicts, terrorism and refugee flows as complications for the global economic landscape.

“We reaffirm our previous exchange rate commitments, including that we will refrain from competitive devaluation and we will not target our exchange rates for competitive purposes. We will resist all forms of protectionism,” they said.

But they offered no new initiatives to keep global growth from stalling, repeating language that member countries “will continue to explore policy options,” but adding that they would be “tailored to country circumstances.”

The G20 gathering, the highlight of the International Monetary Fund and World Bank spring meetings in Washington, came amid growing pressure on richer nations to boost infrastructure spending, deregulate industries and spur employment.

Earlier this week the IMF cut its 2016 growth forecast for the world economy, the fourth such move in less than a year.

The meetings this week also coincided with weakness in a number of key commodity-based economies, particularly Brazil, which is enduring its worst recession in decades.

In a statement to the G20 on Thursday night, Indian Finance Minister Arun Jaitley said governments could not continue relying on central banks to take the lead in spurring growth and should consider boosting spending.

“We feel that the efficacy of monetary policy instruments has reached its limits and that its pass-through has not been seamless,” Jaitley said.

“The time is ripe for a re-evaluation of the fiscal policy space, with a greater focus placed on public investment.”

Although India is one of the brightest stars of the world economy, with the IMF predicting 7.5 per cent growth this year, Jaitley warned that the global recovery was fragile and could easily be derailed by weak demand, tighter financial markets, softening trade and volatile capital flows.

“We, therefore, need to articulate an effective and tangible policy response to revive the trade engine of the global economy,” he said.

But Jaitley’s currency views appeared at odds with those of Japanese officials, who expressed concerns about increases in the value of the yen, which recently hit a 17-month high against the dollar.