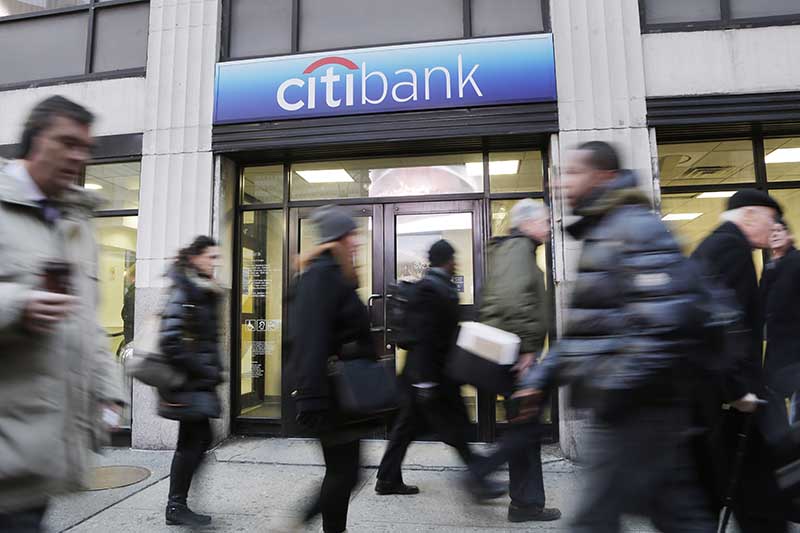 People walk past a branch office of Citibank in New York

New York: Citigroup’s quarterly profit plunged 27 per cent, dragged down by lower revenue from trading and investment banking as well as costs to shrink some businesses and cover bad loans to the energy industry.

The number four bank in the US by assets also said yesterday that it could incur another $1 billion in credit costs this year if oil slipped to below $35 per barrel.

Citigroup has reported the biggest drop in profit among big US banks that have released first-quarter results so far, but lower operating expenses helped the bank beat Wall Street’s low expectations.

Banks globally have had a tough start to the year amid near-zero interest rates and a slowdown in China. Adding to the pain are loans to energy companies as a slump in oil prices drives many oil and gas producers to the brink of bankruptcy.

“We still feel like we have a very good book of energy loans that compares well versus competitors,” Chief Financial Officer John Gerspach said on a post-earnings call.

The bank set aside $340 million in the first quarter to cover losses related to its energy loans, an increase of 36pc from the fourth quarter.

Investment banking fees across the industry fell 29pc in the period, the slowest first quarter since 2009, according to Reuters data.

The bank, like its rivals, has resorted to aggressive cost controls to underpin earnings over the past several quarters as revenue remains weak. Its operating expenses declined 3.3pc to $10.5bn.

Citigroup, which has more assets in emerging markets than other US banks, has been exiting less-profitable markets and cutting jobs to become more efficient. The bank recorded $491m in so-called “repositioning” charges.

Citi Holdings, the “bad bank” that holds businesses marked for sale, reported a steep 31pc drop in revenue as assets in the unit shrank 4pc.

The better-than-expected results come two days after Citigroup won a huge endorsement from regulators, who said the bank was the only one of eight reviewed to have a credible plan to deal with a potential bankruptcy without relying on public money.

The endorsement gives investors reason to believe that the bank will win approval in June from the US Federal Reserve to return more money to shareholders.

Citigroup’s net income fell to $3.5bn, or $1.10 per share, in the quarter ended March 31, beating the average analyst estimate of $1.03 per share, according to Thomson Reuters I/B/E/S.