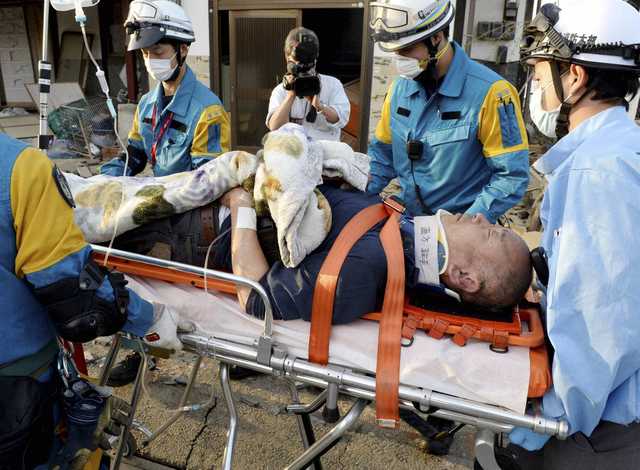 Tokyo: Japanese rescuers dug through the rubble of collapsed buildings and mud on Saturday to reach people trapped after a powerful 7.3 magnitude earthquake struck a southern island, killing at least 25 people and injuring more than a thousand.

The shallow earthquake hit in the early hours of Saturday, sending people fleeing from their beds and onto dark streets, and follows a 6.4 magnitude quake on Thursday which killed nine people in the area.

"I felt strong shaking at first, then I was thrown about like I was in a washing machine," said a Tokai University student who remains isolated in the village of Minamiaso in Kumamoto province on the island of Kyushu.

"All the lights went out and I heard a loud noise. A lot of gas is leaking and while there hasn't been a fire, that remains a concern," the student, who is sheltering in a university gym with 1,000 other students and residents, told Japanese media.

Prime Minister Shinzo Abe said the speed of rescue efforts was critical given that wet weather is forecast overnight, which could further damage weakened buildings and cause landslides.

"Nothing is more important than human life and it's a race against time. I want rescue activities to continue with the utmost effort," Abe said at a government meeting after the disaster.

The epicentre of the quake was near the city of Kumamoto and measured at a shallow depth of 10 kms (6 miles), the USGS said.

Television footage showed fires, power outages, collapsed bridges and gaping holes in the earth. Residents near a dam were told to leave because of fears it might crumble, broadcaster NHK said.

The quake triggered a tsunami advisory which was later lifted and no irregularities were reported at three nuclear power plants in the area, a senior government official said.

Electronics giant Sony Corp said a factory producing image sensors for smartphone makers will remain closed while it assesses the damage from the quakes. One of its major customers is Apple which uses the sensors in iPhones.

Toyota Motor Corp halted production at three plants producing vehicles, engines and trans axles in Fukuoka. Toyota said there was no damage at its plants, but it was checking the status of its suppliers. It will decide on Sunday whether to resume production.

Nissan Motor Co Ltd stopped production at its Fukuoka plant which produces vehicles including the Serena, Teana, Murano and Note.