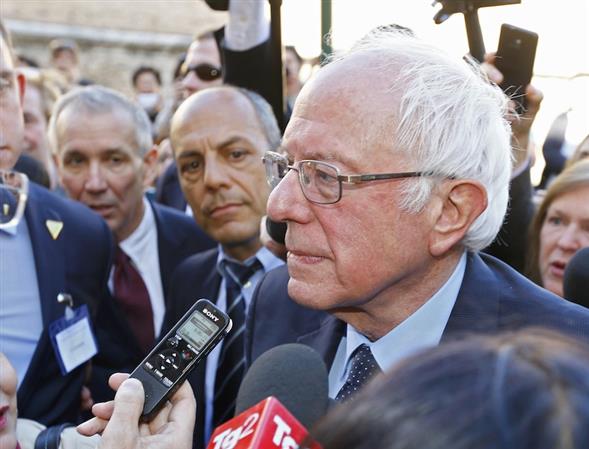 Sanders speaks with media and supporters during his visit to the Vatican. (Reuters Photo)

Sanders, who broke away from the presidential campaign trail to travel to Rome, spoke of the five-minute meeting afterwards in interviews with CNN and ABC, calling the Pope "a beautiful man."

There were no cameras at the meeting, which was described as an encounter in a foyer at the Pope's residence at Santa Marta, shortly before he departed for the Greek island of Lesbos to see the plight of refugees.

The quick meeting was particularly striking because Sanders, a self-described democratic socialist, is a secular Jew whose positions on social issues are far from those of the Pope.

"I was leaving Santa Marta. He knew that I was leaving and he was kind enough to greet me," the Pope later told reporters on the flight home from Lesbos.

"I greeted him and his wife and another couple who were with them and staying at Santa Marta. Nothing more," the Pope said.

"It was a matter of politeness and if anybody thinks that greeting somebody amounts to meddling in politics, they should go find a psychiatrist," he said.

But it clearly was a dramatic way for Sanders to gain attention for his campaign, just three days before a crucial primary in New York, where he faces off against frontrunner Hillary Clinton.

Sanders has made attacks on Wall Street, the "billionaire class" and a growing rich-poor divide the core of his campaign, and he seized the opportunity to identify with Francis's calls for greater economic equality.

"I just conveyed to him my admiration for the extraordinary work he is doing raising some of the most important issues facing our planet and the billions of people on the planet and injecting the need for morality in the global economy," Sanders told ABC.

On CNN, Sanders praised the Pope's call for "a moral economy" and the need to "transform our energy system so as to prevent climate change from wreaking havoc on this planet."

He said he wanted Francis to know "how appreciative I was of the extraordinary role he is playing throughout the world in raising consciousness about massive levels of income and wealth inequality, greed such that the top one per cent now owns more wealth globally than the bottom 99pc."

Sanders' wife Jane, who is Catholic, was also at the meeting along with Marcelo Sanchez Sorondo, the Argentine head of the Pontifical Academy of Sciences, a kind of Vatican think tank on social, economic and environmental issues.

Sanchez Sorondo had invited Sanders to come to the Vatican for a conference on Friday.

The Brooklyn-born Sanders lags behind Clinton in the polls in New York by more than 10 points, according to a RealClearPolitics average.

But he attracted thousands to a rally in New York's Washington Square earlier this week, demonstrating the pull of his well-funded campaign, particularly among young voters.