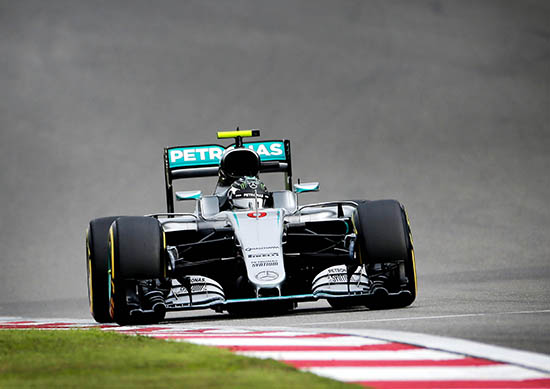 SHANGHAI: Nico Rosberg claimed pole position for the Chinese Formula One Grand Prix but Mercedes team mate Lewis Hamilton will start from the back of the grid after suffering engine trouble in qualifying yesterday.

World champion Hamilton failed to set a time and did not even make it past the opening session after a lack of power forced him back into the pits.

The Briton, who will start today’s race with a new power unit, took to the track to attempt a lap despite having complained to his team early on over the radio.

Hamilton, who last mounted the top step of the podium at the US Grand Prix in October, arrived in China hoping to turn the tables on his German colleague.

Championship leader Rosberg has won the last five races, including both 2016 Grands Prix, and holds a 17-point advantage over his team mate.

Triple champion Hamilton, carrying a five-place grid penalty for changing his gearbox, was already on the back foot as he looked to add to his record four Chinese victories with a third successive Shanghai win today.

“These things are sent to try us and I am sure we will learn from it,” said Hamilton who went on to finish on the podium the last time he started at the back of the grid in Hungary in 2014.

“The car is quick. Hopefully they get the issue fixed and we can have a race tomorrow.”

Rosberg, who last started at the front in the 2015 season-ending Abu Dhabi Grand Prix, clocked one minute 35.402 seconds to seize a 23rd career pole and first of the season.

It was also the ninth straight pole for Mercedes.

“The whole weekend has gone well,” said Rosberg who may have another advantage in starting the race on more durable soft tyres.

Rosberg ended up more than half-a-second clear of Red Bull’s Daniel Ricciardo who was a surprise second.

Ferrari had set the pace in all sessions this week, including the first two phases of qualifying, but their challenge faltered when it mattered.

Qualifying reverted to the 2015 format after the much-maligned rolling elimination system introduced this year was abandoned.

Yesterday’s action was stopped twice due to rain.

The first stoppage lasted 20 minutes as marshals dried up wet patches on the track after Manor rookie Pascal Wehrlein crashed.

Stewards deemed the German had been released from the pits in an unsafe condition and handed him a three-place grid drop. He will start in 13th spot.