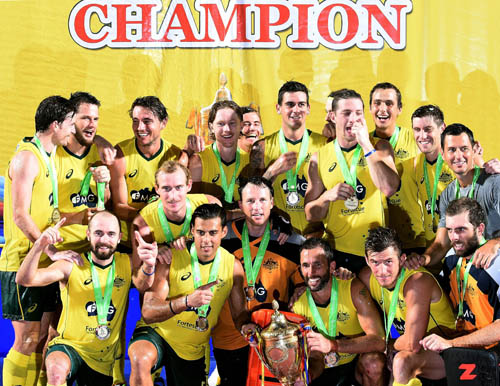 A brace each from Thomas William Craig and Matt Ghodes helped Australia clinch their ninth title at the tournament.

After the goalless first quarter, Thomas William Craig broke the deadlock by striking in the 25th minute to give Australia 1-0 lead. India squandered their chance to equalise when they failed to convert the penalty corner in the start of the third quarter.

Thomas Craig extended Australia’s lead in the 35th minute with his brilliant second field goal of the match.

India, who came to this match with the second best conversion rate of penalty corners, again made a mess of it when Rupinder Pal Singh’s hit was denied by the Aussie goalkeeper.

India went bad to worse in the third quarter as Matt Ghodes found the back of the nets to make it 3-0 for Australia and dented India’s hopes of making a comeback in the match.

Ghodes piled more misery on India by scoring his second goal of the match in the 57th minute.

India made it to their seventh final of the tournament after outplaying hosts Malaysia 6-1 in the last league match on Friday.