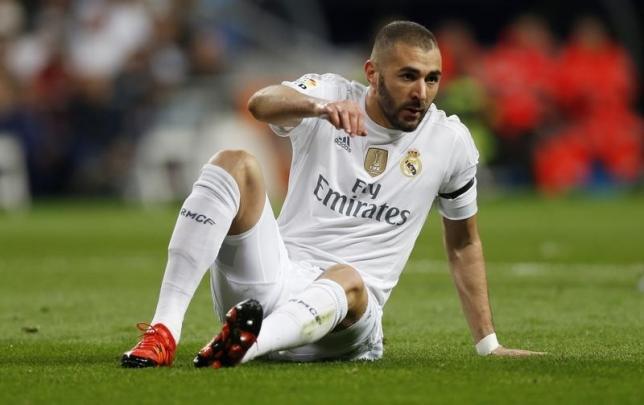 Madrid: Karim Benzema overcame the disappointment of being left out of France's Euro 2016 squad with a goal and two assists as Real Madrid moved to within a point of La Liga leaders Barcelona with a 5-1 thrashing of Getafe on Saturday.

Madrid boss Zinedine Zidane urged Benzema to "rally quickly" after the French Football Federation announced on Wednesday he will not be selected for the tournament on home soil due to his involvement in a sex-tape scandal, where international teammate Mathieu Valbuena was the subject of a blackmail plot.

Benzema followed his coach's orders as he swept home the opener, before his through ball was prodded home by Isco to give Madrid a commanding 2-0 lead at half-time.

However, Atletico and Barca can reassert themselves in the title race when they host Granada and Valencia respectively on Sunday.

"It did affect him and yes he is disappointed, but he is a professional and he knows that on the field he is very important for the team," Zidane said of his compatriot Benzema.

"Today he scored and had two assists, so he is very concentrated on what he is doing."

Zidane had warned his side against complacency, but Getafe, who have now gone 13 La Liga games without a win, never looked like troubling a Madrid team still on a high from their Champions League comeback against Wolfsburg to reach the semi-finals on Tuesday.

Ronaldo was Real's hero with a hat-trick in midweek and he just failed to get a touch on Rodriguez's tantalising low cross before smashing an effort from outside the box off the post as Madrid started brightly.

However, it took until just before the hour mark for the visitors to make the breakthrough when Benzema swept home Rodriguez's cross for his 22nd La Liga goal of the campaign -- his best ever single-season return in seven years in Spain.

Ronaldo had another great chance to double Madrid's lead when he fired straight at Vicente Guaita instead of squaring for Bale moments later.

Yet, Madrid's dominance was rewarded with a second goal before half-time when Isco stretched to convert Benzema's pass past the onrushing Guaita.

Bale also ensured his highest ever goalscoring La Liga season with his 16th of the campaign as he raced onto Benzema's ball over the top before coolly slotting into the far corner.

Zidane then quickly made his three substitutions with Bale, Benzema and Dani Carvajal sacrificed with Wednesday's clash with Villarreal in mind.

The changes took some sting out of Madrid's play and Getafe were rewarded for their endeavour in the final quarter when former Real academy prospect Sarabia curled into the top corner.

Madrid did have the final word though, as Rodriguez controlled Lucas Vazquez's low cross before side-footing home his side's fourth.