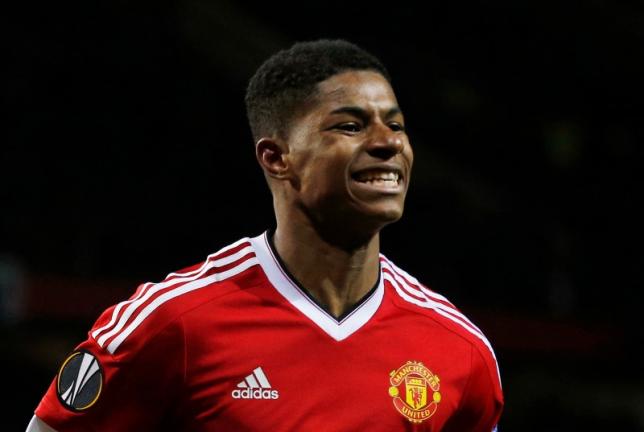 Manchester: Marcus Rashford continued his stunning start to life in Manchester United's first-team as his fine finish secured a laboured 1-0 win over Aston Villa at Old Trafford on Saturday that relegated the bottom-of-the-table club from the Premier League.

Rashford scored the only goal of a forgettable game in the 32nd minute to maintain United's challenge for a top-four place.

Defeat rubber-stamped Villa's demise and meant the former European champions were headed to the second-tier of English football for the first time in 29 years after a dismal campaign where they've won just three out of their 34 Premier League games so far this season.

Rashford shone in a largely pedestrian United performance as his superb finish gave him a seventh goal in 12 first-team appearances.

United survived a couple of late scares, including Villa hitting the woodwork, although a draw would still have seen the visitors demoted to the Championship.

Managerless Villa were happy to sit back and soak up United pressure early on and Louis van Gaal's side, having been handed the territorial initiative, had two chances from set-pieces in the opening 10 minutes.

First United defender Chris Smalling failed narrowly to get his head to a corner from Daley Blind and then Marcos Rojo headed over the crossbar from a free-kick by Memphis Depay.

United enjoyed almost 70 percent of possession and forced seven corners in the opening 20 minutes, but without a shot on target.

The eighth United corner was almost worse for Birmingham club Villa, as Joleon Lescott was just a couple of yards away from slicing a Rashford cross into his own net.

Juan Mata then threatened to unlock the Villa defence when his quick feet took him last two challenges and into the penalty area, but he misdirected his right-footed shot so badly it went for a throw-in.

There was a healthy dose of gallows humour among the travelling Villa fans as they contemplated their fate and the celebrated with ironic cheers when Kieran Richardson had their first shot, which flew over the crossbar.

United finally broke the deadlock when Rashford opened the scoring in the 32nd minute.

He finished clinically from Antonio Valencia's cross for after a pinpoint pass by Wayne Rooney had released the full-back on the overlap.

In the final minute of the first half, Jordan Ayew tricked his way into the United penalty area as home defenders stood still, but his shot was blocked by Rojo.

Rashford might have doubled United's lead just two minutes into the second half when he darted onto a clever through-ball from Mata.

But the young forward stabbed his shot into the side-netting.

Rooney was the next man to threaten Villa as he drifted into space to receive a Depay pass after a quick United break, but the United captain's touch let him down and the chance disappeared.

Depay's quick feet then took him past Scott Sinclair's flat-footed challenge but his cross was clawed away by Brad Guzan in the Villa goal.

Then Guzan made an awkward-looking save at his near post to keep out a tame Mata shot.

Rooney's league comeback ended after 68 minutes when he was withdrawn to make way for Jesse Lingard in what appeared to be a pre-planned switch.

Villa ought to have claimed an equaliser as substitute Rudy Gestede twice went close within moments of joining the fray.

First he failed to make contact with an Ayew cross, allowing Blind to clear, and a minute later he volleyed against the post from a corner.

In stoppage-time, Depay almost doubled United's lead but his shot was scrambled onto the post by Guzan.