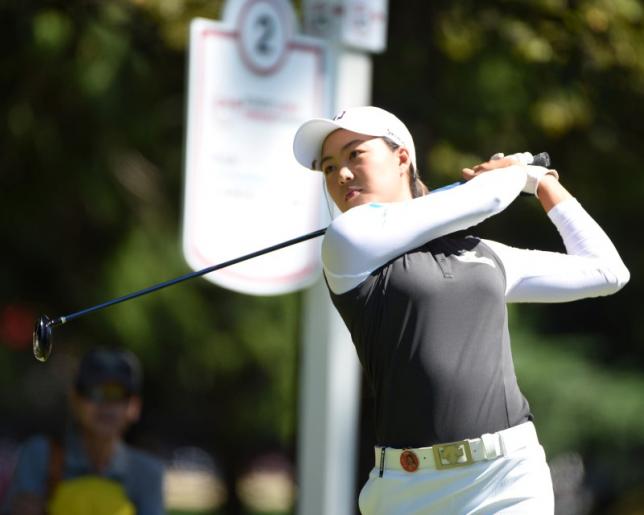 Coquitlam, British Columbia, CAN; Minjee Lee drives from the second tee during the third round at Vancouver Golf Club. (Reuters Photo)

Australia's Minjee Lee overcame a five-shot deficit in the final round to claim victory at the LPGA's Lotte Championship in Hawaii on Saturday.

The 19-year-old played her final eight holes in six-under-par, chipping in for an eagle-three at 13 on the way to a bogey-free eight-under 64.

Lee's combined 16-under was one better than South Korea's Chun In-gee (67) and overnight leader Katie Burnett (70), whose title hopes were dented by a three-putt bogey at 16.

Lee said her coach had reassured her the title was still up for grabs despite starting the day five shots back.

"Yesterday I spoke to my coach and he said 'You're only five back, just shoot eight under and you'll be fine,'" the world number 17 told Golf Channel. "I just did all I could do and here I am.

"This is definitely a big confidence booster. The last couple of weeks I was there, but not quite. Now my game seems to be coming together and that's quite nice," added Lee, who got her first LPGA win last May at the Kingsmill Championship.

Burnett, who recorded just her second top-10 in four years on the LPGA Tour, saw a short birdie putt on 17 lip out of the cup and had a two-putt par on 18 when she needed a birdie to force a playoff.

"I don't think I gave it away by any means," Burnett said.

South Korean Chun, last year's U.S. Open champion, also had a chance to catch Lee on 18 but her 16-foot birdie putt came up short and she had to settle for a fourth consecutive par.

Moriya Jutanugarn of Thailand finished fourth at 14-under after a final round of 68.