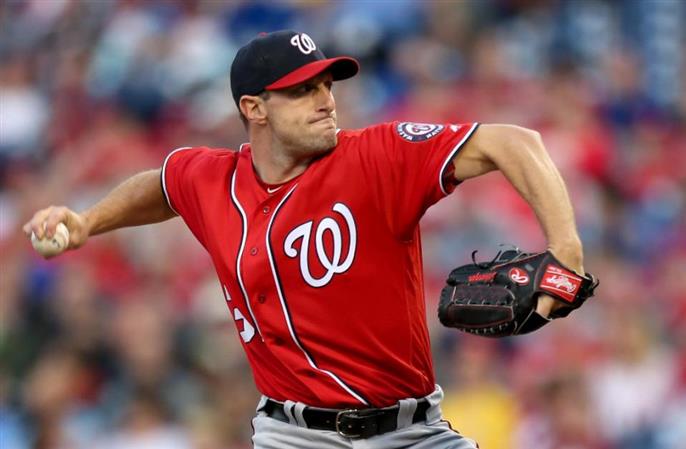 Philadelphia: Bryce Harper said after Friday's game that he was having a lot of fun. The Washington outfielder has certainly been making Philadelphia a fun place to play for the Nationals as Washington drubbed the Phillies, 8-1.

After driving in a run in the first inning with a sacrifice fly, Harper clubbed a two-run homer -- his second home run in as many nights -- off Phillies starter Aaron Nola to extend Washington's lead to 7-0.

Harper went 2-for-3 with three RBIs, extending his dominance at Citizens Bank Park to 12 hits in his last 20 at-bats in five games.

Jake Arrieta returned to form in his first Wrigley Field outing since a 2015 playoff loss, striking out eight and allowing just five hits as the Chicago Cubs beat the Colorado Rockies.

Arrieta, who went 22-6 in a 2015 National League Cy Young season, improved to 3-0 as he worked eight shutout innings and walked just one.

Felix Hernandez matched Hall of Famer Randy Johnson for the most strikeouts in Seattle franchise history but pitched only five innings.

It also was Hernandez's final pitch because his pitch count was at 106 due to a career-high tying six walks.

Oswaldo Arcia and Byung Ho Park hit back-to-back home runs in the bottom of the eighth inning to break a tie game to lift Minnesota over Los Angeles.

The Twins have won back-to-back games after starting the season 0-9. The Angels have lost two straight following a four-game winning streak.

Arcia's solo blast came off Angels Joe Smith and landed in the bullpen over the left-centre field fence. Park followed with a mammoth blast, 462 feet in centre field on a 2-2 offering from Smith for his second homer of the season.

Brandon Phillips' RBI double capped a four-run sixth inning and Cincinnati hung on for a win to snap a four-game losing streak.

The Reds trailed 4-0 before they rallied to tie the game with two runs in the fourth and two in the fifth, then knocked out Adam Wainwright and took an 8-4 lead in the sixth.

Continuing his career domination of one of his former teams, David Price picked up his first home win for his new one.

Price gave up six hits and ended his day by striking out the side in the seventh inning, giving him nine strikeouts (and no walks) as he improved his career mark to 17-2 against the Jays.

Cleveland got RBIs from six players and Josh Tomlin pitched an economical five innings to get the win.

Tomlin gave up one run and four hits with six strikeouts and no walks. He was removed from the game after the fifth inning because of a right hamstring cramp.

Gray allowed two runs (one earned) and seven hits. He struck out six, walked one and threw a season-high 114 pitches.

Markakis went 3-for-5 and is hitting .341. His RBI double in the fourth keyed Atlanta's tie-breaking three-run rally. Eight of Markakis' past 12 hits have been doubles.

Andrew McCutchen hit his first home run of the season and Jon Niese combined with two relievers on a three-hitter to lead Pittsburgh and end a four-game losing streak.

McCutchen hit a solo shot off Taylor Jungmann in the fifth inning to increase the Pirates' lead to 4-0 after they scored three runs in the fourth.

Tampa Bay had held the lead after a total of eight innings in their first 10 games, but did so for seven innings Saturday, getting strong pitching in 5 2/3 shutout innings from spot-starter Erasmo Ramirez.

Texas put together its biggest inning of the season and matched its win total (seven) from last season with a win over Baltimore.

Texas scored six times in the seventh inning, turning a 4-2 deficit into an 8-4 lead by sending 10 batters to the plate against three Baltimore pitchers.

Right-hander Johnny Cueto retired the first 13 batters he faced and conceded just three hits in leading the San Francisco Giants to a 4-3 victory over the Los Angeles Dodgers on Saturday night in front of a sellout crowd of 53,409 at Dodger Stadium.

Cueto (3-0) permitted just one run and two walks in 7 1/3 innings, collected six strikeouts and induced 10 groundouts. At the plate, Cueto got his first hit of the season.

San Diego: Melvin Upton Jr. hit a two-out, two-run walk-off homer in the bottom of the 14th inning Saturday night to give the San Diego Padres a 5-3 win over the Arizona Diamondbacks at Petco Park.

Nick Castellanos and Jarrod Saltalamacchia recorded multi-hit games and combined for a decisive sixth-inning rally in the Detroit Tigers' 5-3 win over the Houston Astros on Saturday night at Minute Maid Park.

Castellanos finished 3-for-5 while Saltalamacchia went 2-for-5 to back right-hander Justin Verlander (1-1), who survived a rocky start to work six quality innings and outlast Astros right-hander Collin McHugh (1-2).