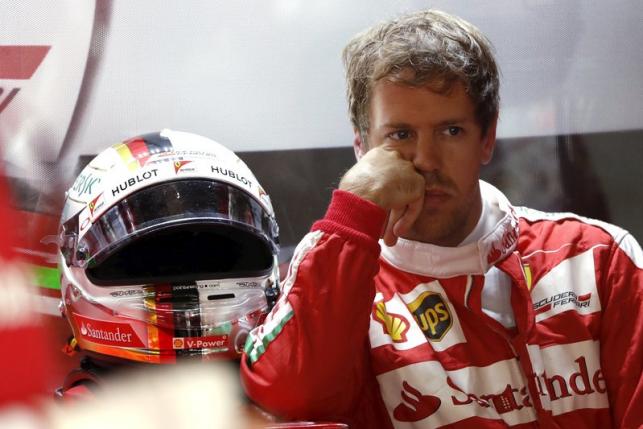 Ferrari Formula One driver Sebastian Vettel of Germany arrives at his garage during the first practice session. (Reuters Photo)

Shanghai: Sebastian Vettel labelled Red Bull's Daniil Kvyat "a madman" after a first-corner clash between them and Vettel's Ferrari team-mate Kimi Raikkonen at the Chinese Grand Prix on Sunday.

Kvyat's aggressive charge into turn one where the Ferraris were already wheel-to-wheel forced Vettel to take evasive action, the German hitting Raikkonen, who had to pit to repair damage to his car.

Vettel was left languishing near the back after the clash but fought back to overtake Kvyat in the final stint and finish second behind Nico Rosberg's Mercedes.

"You came like a torpedo," the German raged at Kvyat, confronting his rival as they walked to the podium. "If I'd kept going on the same line, we'd have crashed.

"You were lucky this time," Vettel added, jabbing his finger in the direction of Kvyat, who simply shrugged: "That's racing."

"I couldn't see all the three cars man, come on," protested Kvyat. "I have only two eyes."

As tempers flared, Vettel snapped: "You'll crash driving like that, it's crazy!"

Vettel had reacted angrily on the track after his brush with disaster, accusing Kvyat of driving "like a madman" in a furious rant over the team radio.

"Kvyat's attack was suicidal," he fumed before apologising for bumping into Raikkonen. "Massive apologies to the team. I feel very, very sorry about Kimi but there was no way out!"

"You see a gap, you go for it," said the Russian. "Yeah, it was a risky move, I agree with Seb. But this kind of move can bring you podiums.

"I was very lucky to continue because it was a big hit with Kimi," said the four-time world champion. "It's a shame because you don't want the same colour cars touching."

"Obviously I got hit and it was a disaster after that," said the Finn. "I just had to make the best of it and at least we got some points."

"It was an accident," he said. "Pointing the finger at somebody is not correct. This is racing, not Monopoly.

"I think in normal circumstances we would have had a very, very good chance to win the race but when things like this happen, you have to accept it."