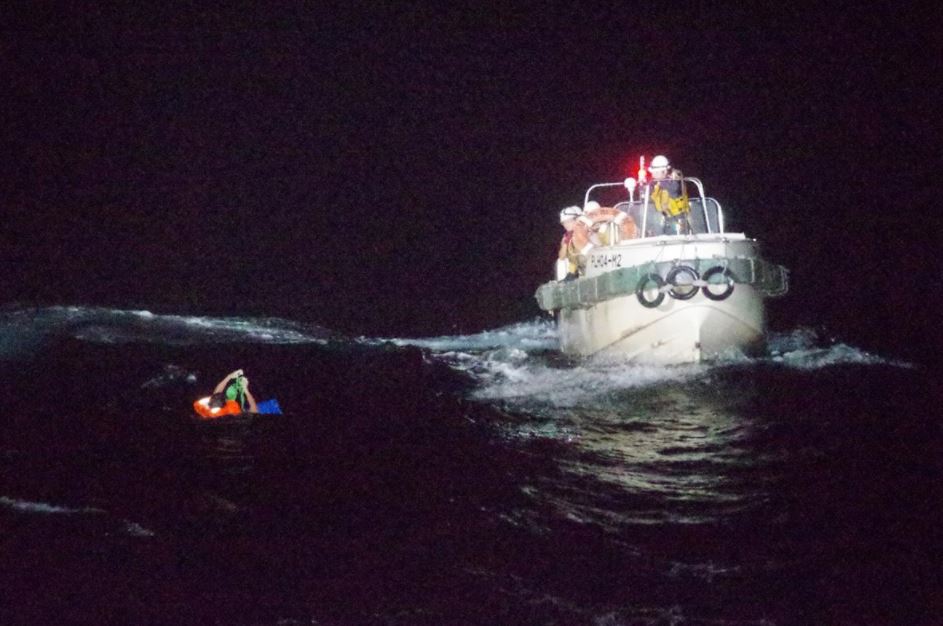 A Filipino crew member believed to be onboard Gulf Livestock 1, a cargo ship carrying livestock and dozens of crew members that went missing after issuing a distress signal due to Typhoon Maysak, is rescued by a Japan Coast Guard boat during their search and rescue operation at the East China Sea, to the west of Amami Oshima island in southwestern Japan, in this handout photo taken on September 2, 2020 and provided by Japan Coast Guard. Picture taken September 2, 2020. (Reuters Photo)

TOKYO/WELLINGTON - A ship carrying 43 crew and nearly 6,000 cattle from New Zealand to China capsized after losing an engine in stormy weather in the East China Sea, the only crew member rescued so far told Japan’s coastguard on Thursday.

The Gulf Livestock 1 sent a distress call from the west of Amami Oshima island in southwestern Japan on Wednesday as Typhoon Maysak lashed the area with strong winds and heavy seas.

According to Edvarodo, the ship lost an engine before it was hit by a wave and capsized, a coastguard spokeswoman said.

When the ship capsized, crew were instructed to put on lifejackets. Edvarodo told the coastguard he jumped into the water and did not see any other crew members before he was rescued.

Pictures provided by the coastguard showed a person in a lifejacket being hauled from choppy seas in darkness.

Three vessels, five airplanes and two divers had been deployed to continue the search, the coastguard said.

The crew included 39 people from the Philippines, two from New Zealand, and two from Australia, it added.

The Philippines government said it was coordinating with the Japanese coastguard in the search.

Typhoon Maysak made landfall in South Korea on Thursday, bringing lashing winds, and at least two people were killed in the southern city of Busan. Another storm, Typhoon Haishen, was brewing south of Japan and is expected to hit the Korean coast on Sunday or Monday.

The Gulf Livestock 1 departed Napier in New Zealand on Aug. 14 with a cargo of 5,867 cattle bound for the Port of Jingtang in Tangshan, China. The journey was expected to take about 17 days, New Zealand foreign ministry officials told Reuters.

The 139-metre (450-foot), Panamanian-flagged vessel was built in 2002 and the registered owner is Amman-based Rahmeh Compania Naviera SA, according to Refinitiv Eikon data. The ship manager is Hijazi & Ghosheh Co.

Calls to the owner and manager were unanswered.

The young cows were exported by Australia-headquartered Australasian Global Exports, which specialises in live animal exports and owns quarantine facilities in China.

The cows were worth around 20,000 yuan each, said a manager at AGE’s subsidiary Beijing Muhuayuan International Trade Co Ltd.

“These cows should never have been at sea,” said campaigns manager Marianne Macdonald.

“This is a real crisis, and our thoughts are with the families of the 43 crew who are missing with the ship. But questions remain, including why this trade is allowed to continue.”

China has imported more than 46,000 head of cattle from New Zealand so far this year, according to data from China’s customs, mostly to stock the country’s expanding dairy farms.

Last year, New Zealand launched a review of its live export trade, worth around NZ$54 million ($37 million) in 2019, after thousands of animals being exported from New Zealand and Australia died in transit.