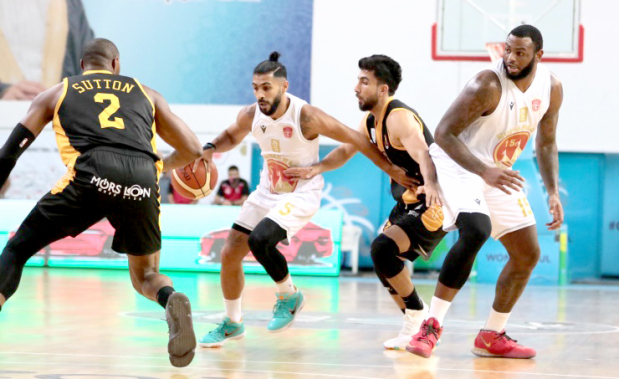 Action from the game between Al Ahli and Muharraq

In the first first game, Manama outplayed Riffa 110-73 while Al Ahli held off Muharraq 76-70 in the other encounter.

Manama’s Muhammad Hussain and Mustafa Hussein scored 20 points each while Mansour Casey was the top scorer for Riffa with 21 points.

Al Ahli went ahead 18-10 in the first quarter against Muharraq, who roared back to claim the second canto 23-11. The teams tied 22-22 in the third quarter and valiant effort by Al Ahli in the deciding quarter (25-15) helped them overcome Muharraq.

American professional Brandon Brown led the scoring for Al Ahli with 23 points and Ahmed Hassan was the top scorer for Muharraq with 24 points.

The second round of the Golden Square matches will be held on Sunday.