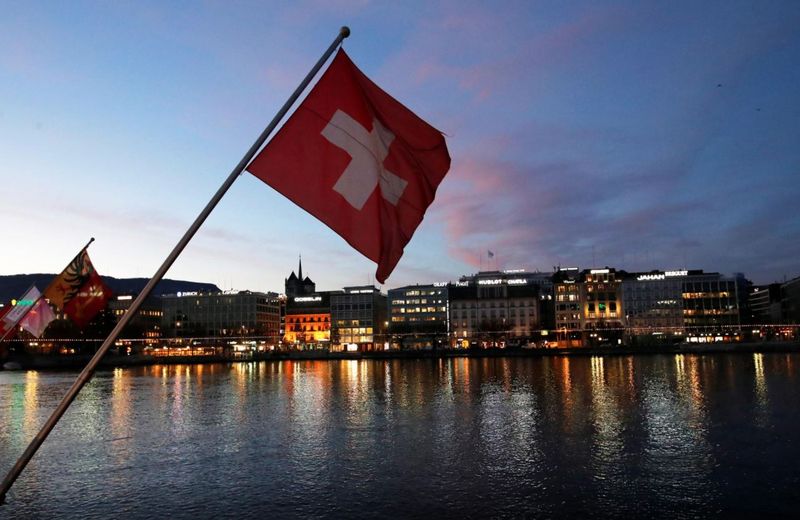 FILE PHOTO: A Swiss flag is pictured during the sunrise on the Commercial and Financial District in Geneva, Switzerland, November 23, 2017. REUTERS/Denis Balibouse

The latest SECO forecast was an improvement from its June outlook when it said it expected Swiss gross domestic product would fall 6.2% this year, the worst downturn since 1975.

The easing of lockdown restrictions from the end of April helped a recovery, SECO said, although unemployment still remained higher than a year earlier.

Consumer and investment demand exceeded expectations during the second quarter, while short-time working - a measure introduced to prevent layoffs - was needed less than previously thought.

The improving situation is expected to have continued into the third quarter, the government said, with some sectors like accommodation and restaurants being boosted by stay-at-home Swiss customers.

Still, parts of the economy depended on global demand such as manufacturing industry and international tourism, were still facing a tough time.

For 2021 SECO said it expects the Swiss economy to grow by 3.8% when adjusted for income for sporting events, a slower recovery than the 4.9% level that was previously anticipated.

As a result, the Swiss economy will return to its pre-crisis levels only towards the end of 2021, the government said, assuming there was no reintroduction of widespread lockdown measures triggered by a resurgence in COVID-19. (Reporting by John Revill Editing by Riham Alkousaa and Louise Heavens)