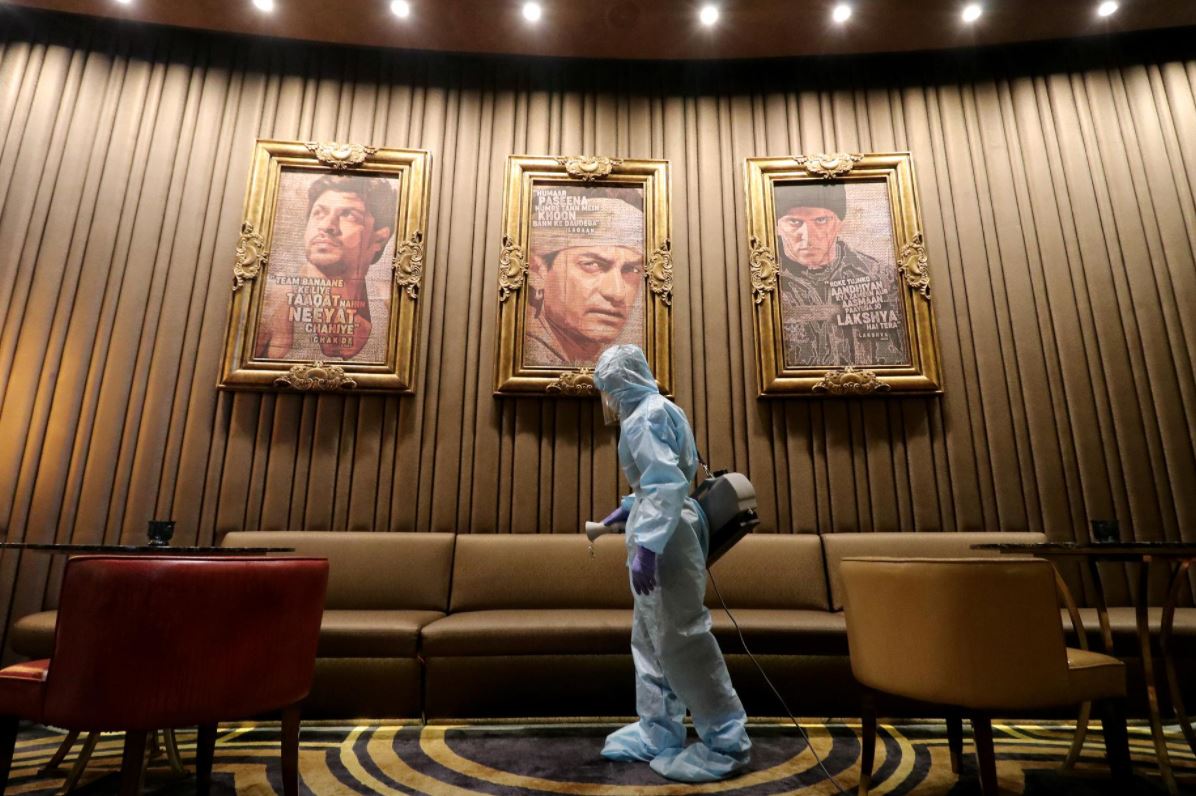 A worker wearing personal protective equipment (PPE) sanitizes the premises of Inox Leisure theatre ahead of its reopening, amidst the outbreak of the coronavirus disease (COVID-19), in Mumbai, India, October 13, 2020. REUTERS/Niharika Kulkarni

Mumbai: Movie theatres in some parts of India will open for the first time in eight months on Thursday, but with no major Bollywood releases likely any time soon, beleaguered cinema owners worry if audiences will be lured back to the big screen.

All of India’s near-10,000 movie screens have remained shut since the country imposed a strict lockdown in March this year, at the beginning of the novel coronavirus outbreak.

As Prime Minister Narendra Modi pushes for a gradual reopening, some states have allowed theatres to reopen, though at 50 per cent capacity and with strict virus-curbs in place.

Yet Bollywood has stayed away despite the upcoming festival season when ticket sales usually peak and audiences flock to theatres.

“It’s a chicken and egg situation,” said Shibasish Sarkar, CEO of Reliance Entertainment, which has two big-ticket movies waiting to be released.

“We won’t know if audiences will come unless we release a film, but the big question is if those audiences are enough,” he said.

For now, theatres are screening older films, including a biopic of Modi, which first released after his resounding election victory last year.

Instead of waiting for theatres to open, several Bollywood production houses have instead sold movies to streaming platforms like Netflix, Disney and Amazon’s Prime Video, which have premiered several titles in the last few months.

“We are trying to test the waters, see if audiences will come back. Once they do, hopefully we will see new movies releasing,” Akshaye Rathi, a theatre owner who owns properties in the central states of Madhya Pradesh and Chhattisgarh, told Reuters.

“Many single-screen theatres will probably never open, and we won’t know the full impact until theatres actually do open,” Shailesh Kapoor of Ormax, an agency that tracks Bollywood releases, said.