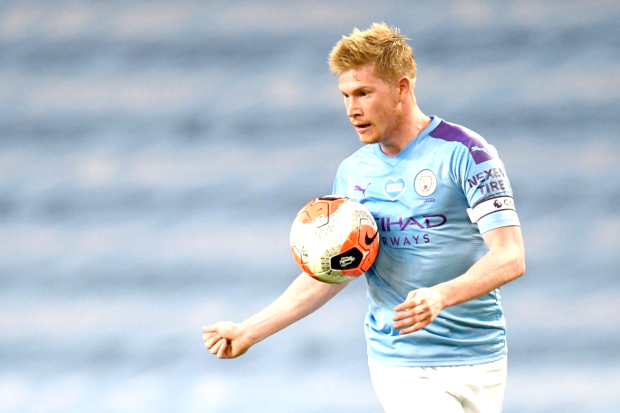 The midfielder was substituted in the second half of Belgium’s 2-1 Nations League defeat by England at Wembley last Sunday and then withdrew from the national squad with an unspecified injury.

“The squad have come back a little better than the previous time. Unfortunately Kevin is out but the rest of the players came back well,” Guardiola told reporters when asked about players returning from the international break.

“I don’t think it’s much but the next games I think he will be out,” added the Spaniard of the extend of De Bruyne’s injury. “But we will see day by day how he is going on.”

City have a busy fixture list, hosting Porto in the Champions League group stage on Wednesday before a league trip to West Ham on the following Saturday.

They then travel to Marseille for another group stage game the Tuesday after.

Guardiola had better news on striker Sergio Aguero, City’s record goalscorer, after the Argentine returned to training following a knee injury in June.

“Sergio is training well and I’m so happy to see him on the pitch after such a long time,” said the Spaniard. “Every team needs a striker and we have played without them the last two, three games.”

Gabriel Jesus is still suffering from a muscle injury and Guardiola said he could not be risked and did not know when he might return.

Today’s match is another clash between Guardiola, whose side have taken only four points from their first three matches, and his former assistant Mikel Arteta but the City boss questioned any ‘master and apprentice’ headlines.

“Maybe we should clarify who’s the master and who’s the apprentice first,” he said.

“He settled really well and the way his team is playing right now is perfect for the quality they have.”