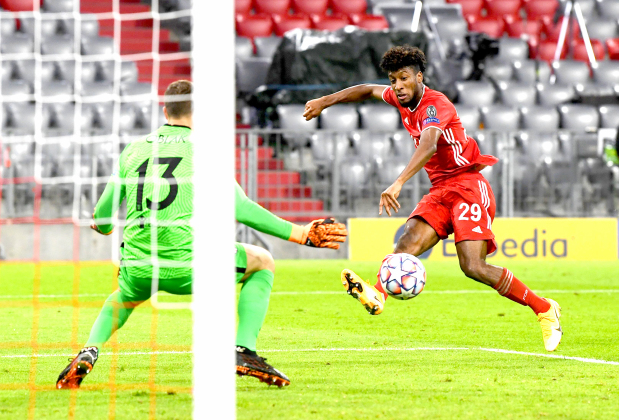 MUNICH: Winger Kingsley Coman scored twice and set up another goal as holders Bayern Munich crushed Atletico Madrid 4-0 in the Champions League Group A opener last night to stretch their winning run in the competition to 12 games.

The France international put the hosts ahead with a fine effort in the 28th minute and then set up Leon Goretzka to fire in their second in the 41st.

Fellow France international Corentin Tolisso killed off any Spanish hopes of a comeback with a sensational shot in the 66th minute before Coman twice shook off defender Felipe to bag his second goal of the evening six minutes later.

Bayern are top on three points in group, with Lokomotiv Moscow and Salzburg on one point following their 2-2 draw.

The Germans were without their in-form winger Serge Gnabry, who tested positive for Covid-19 on Tuesday. But they still enjoyed a whirlwind start and hit the post with Niklas Suele in the 15th.

Coman did it much better 13 minutes later when he latched onto a Joshua Kimmich cross to score with a fine finish. He then set up Goretzka whose slightly deflected shot beat keeper Jan Oblak.

Atletico, with only two wins from their previous 10 away games in the group stage of the competition and without striker Diego Costa, came close just once in the entire first half with Luis Suarez.

Joao Felix did find the back of the net right after the restart but his effort was disallowed for offside.

The Portuguese then launched a solo run in the 65th before laying the ball on for Yannick Carrasco, who waited far too long to finish the move.

They were punished for the wasted chance a minute later with Tolisso firing an unstoppable missile from 25 metres. Coman then added their fourth in the 72nd.

Shakhtar Donetsk pulled off a shock 3-2 win away to 13-times winners Real Madrid, despite the Ukrainian side missing 10 players due to injuries and Covid-19.

Shakhtar raced into a 3-0 lead after a whirlwind first half with a strike from Brazilian midfielder Tete in the 29th minute, an own goal from Madrid defender Raphael Varane four minutes later and a well-taken effort from Israeli forward Manor Solomon.

Luka Modric pulled one back for Zinedine Zidane’s shellshocked side with a brilliant strike from distance early in the second half before substitute Vinicius Jr reduced the deficit to one goal.

Liverpool beat Ajax Amsterdam 1-0 away with a fortunate own goal, riding their luck at times but still showing their title credentials.

Ajax fullback Nicolas Tagliafico turned the ball into his own net in the 35th minute to ensure a winning start in Group D for the English champions, who looked the stronger of the two teams despite Ajax creating several good chances at the Johan Cruyff Arena.

Romelu Lukaku scored twice, including a 90th-minute equaliser, to give Inter Milan a 2-2 draw at home to Borussia Moenchengladbach.

The Belgian put Inter in front with an opportunist goal in the 49th minute but the Bundesliga side levelled in the 63rd with their first shot on target, a penalty converted by Ramy Bensebaini.

Gladbach’s second and only other shot on target also produced a goal as Jonas Hofmann put them ahead in the 84th minute before Lukaku pulled Inter level, scoring in his ninth consecutive European game.

Manchester City came from behind to make a winning start with a 3-1 victory over Porto at the Etihad Stadium.

Porto grabbed a 14th-minute lead when City’s Ruben Dias gave away the ball and Colombian winger Luis Diaz cut in from the left, burst diagonally across the City defence and shot into the far bottom corner of Ederson’s goal.

Pep Guardiola’s side were soon back on level terms though when, after Ilkay Gundogan had struck the post, Porto defender Pepe bundled over Raheem Sterling in the resulting scramble and Sergio Aguero converted the ensuing penalty.

City went in front in the 65th minute with a perfect, curling free kick from Gundogan over the wall and beyond the reach of Porto keeper Agustin Marchesin.

Substitutes Ferran Torres and Phil Foden then combined to make it 3-1.