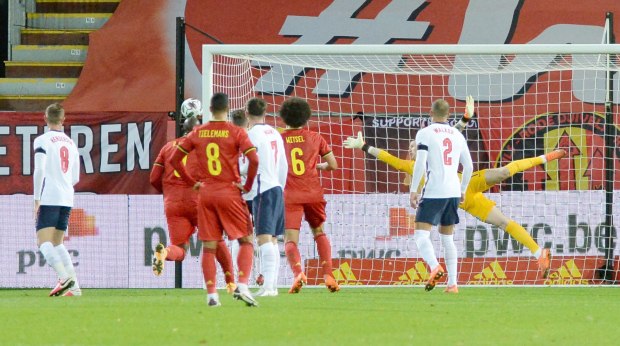 LEUVEN: Early goals by Youri Tielemans and Dries Mertens earned Belgium a comfortable 2-0 win over England to strengthen their grip on top spot in Group A2 while ending the visitors’ hopes of reaching the Nations League Finals in Leuven last night.

England had to win to put themselves back in with a chance of winning the group, but Gareth Southgate’s side found themselves chasing the game after Tielemans put the hosts in front after 10 minutes.

Harry Kane had an effort cleared off the line soon after but it got even worse for England when Mertens curled home a delightful free kick after 23 minutes.

Belgium, the world’s top-ranked side, held on with few real alarms against an unimaginative England side who enjoyed plenty of possession without creating many clear chances.

Roberto Martinez’s Belgium side must now only avoid defeat on Wednesday against Denmark, who beat Iceland 2-1, to win the group. A second successive defeat for England, after a home loss to Denmark, left them in third place in the group with one match to come at home to Iceland.

“We got the early lead then we had to suffer and see the press and risks that England took,” Martinez said.

“We were always in control at 2-0, sometimes it can be dangerous, you feel comfortable but we defended Thibaut Courtois’s goal very well.”

England were architects of their own downfall.

After 10 minutes a casual pass out from the back by Eric Dier was snaffled by Belgium and when the ball was played forward to Romelu Lukaku he squared it to Tielemans.

The Leicester City player’s shot was well hit but skimmed off the leg of Tyrone Mings and although keeper Jordan Pickford got his fingertips to it, the ball went in off the post.

Jack Grealish went close to an immediate response for England when he connected with Kieran Trippier’s low cross but Toby Alderweireld did well to block.

Yet there was no doubting the quality of Mertens’ finish as he curled the ball over the wall and inside the post.

Harry Winks replaced Jordan Henderson after halftime for England, who were missing the injured Raheem Sterling, but it made little difference to their potency.

The bright spot for England was Grealish who followed up his fine performance in the 3-0 friendly win against Ireland this week with another confident performance display.

Defeat was Southgate’s 10th while in charge of England from 48 games, but skipper Kane felt England were unlucky.

“We were dominant. We were unlucky to concede the two goals,” he said. “A deflection and I don’t think the second was a free kick. A lot of positives to take.”