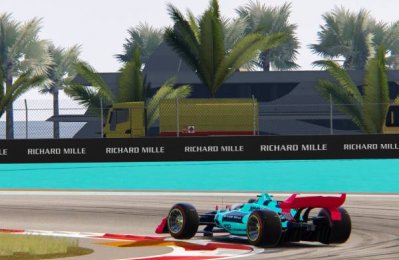 In a significant development that bolsters Abu Dhabi’s position as a global motorsport hub, Abu Dhabi Motorsports Management (ADMM) has announced the renewal of its long-term partnership with Richard Mille, with the addition of branding the YAS HEAT ESPORTS car during the inaugural season of the V10R League.
Based at Yas Marina Circuit, the YAS HEAT ESPORTS ultra-competitive, multi-platform teams assemble top-tier talent from every corner of the globe, as well as bringing UAE esports hopefuls of the future to the forefront.
YAS HEAT ESPORTS is building world-leading racing programs, an unprecedented academy system and dedicated esports community, all centered around an innate determination to succeed in the ever-expanding industry of virtual motorsport.
Saif Al Noaimi, Acting CEO of ADMM, said: “We are thrilled to announce the extension of our strategic and long-lasting partnership with Richard Mille. Ever since we first forged ties with Richard Mille, the partnership has brought tremendous value to both parties in multiple areas. We are partnering with the world’s leader in cutting edge time-keeping and have expanded our relationship into the exciting and innovative new world of esports.”
Peter Harrison, CEO of Richard Mille EMEA, said: ‟With Richard Mille having an historic association with the world of motorsports, it seemed natural to extend our partnership with ADMM, one of the world’s most iconic Formula 1 circuits promoting local motorsports. Through this partnership, we are proud to support their innovations for the future of this sport, as well as accompanying them in their efforts to lead the evolution of Esports within this region, led by Yas Marina circuit.” - TradeArabia News Service