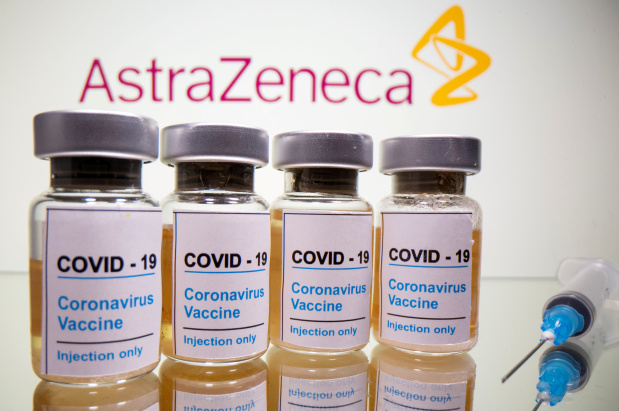 FILE PHOTO: FILE PHOTO: Vials with a sticker reading, "COVID-19 / Coronavirus vaccine / Injection only" and a medical syringe are seen in front of a displayed AstraZeneca logo in this illustration taken October 31, 2020. REUTERS/Dado Ruvic/Illustration/File Photo

Brussels: The European Union will meet AstraZeneca executives on Monday to seek further clarification on why they unexpectedly announced a large cut in supplies of Covid-19 vaccine to the bloc for the first quarter of the year, EU officials said.

AstraZeneca, which developed its shot with Oxford University, told the EU on Friday that it could not meet the agreed supply targets running up to the end of March, with an EU official telling Reuters that meant a 60% cut to 31 million doses.

"We expect the company to find solutions and to exploit all possible flexiblities to deliver swiftly," an EU Commission spokesman said, adding the head of the EU executive Ursula von der Leyen had a call earlier on Monday with AstraZeneca's chief Pascal Soriot to remind him of the firm's commitments.

A second senior EU official said the bloc had a contractual right to check the company's books to assess production and deliveries.

The Anglo-Swedish drugmaker has received an up-front payment of 336 million euros ($409 million) from the EU, a third EU official told Reuters when the 27-nation bloc sealed a supply deal with AstraZeneca in August for at least 300 million doses - the first signed by the EU to secure COVID-19 shots. .

Under advance purchase deals sealed during the pandemic, the EU makes down payments to companies to secure doses, with the money expected to be mostly used to expand production capacity. "Initial volumes will be lower than originally anticipated due to reduced yields at a manufacturing site within our European supply chain," AstraZeneca said on Friday. The site in question is a vaccine factory in Belgium run by the drugmaker's partner Novasep.

"The flimsy justification that there are difficulties in the EU supply chain but not elsewhere does not hold water, as it is of course no problem to get the vaccine from the UK to the continent," said EU lawmaker Peter Liese, who is from the same party as German Chancellor Angela Merkel.

The EU Commission called a meeting with AstraZeneca after Friday's announcement, and it is due to start at 1230 CET.

AstraZeneca was not immediately available to comment on Monday.

The first EU official, who has been directly involved in talks with AstraZeneca, said there were no high expectations about the meeting in which the company will be asked to better explain the delays, although its outcome is still unclear.

Earlier in January, Pfizer, which is currently the largest supplier of Covid-19 vaccines to the EU, announced delays of nearly a month to its shipments, but hours later revised this to say the delays would last only a week.

EU contracts with vaccine makers are confidential, but the EU official did not rule out possible penalties for AstraZeneca, given the large revision to its earlier commitments. However the source did not elaborate on what could trigger the penalties. "We are not there yet," the official added.

"AstraZeneca has been contractually obligated to produce since as early as October and they are apparently delivering to other parts of the world, including the UK without delay," Liese said.

AstraZeneca's vaccine is expected to be approved for use in the EU on Jan. 29, with first deliveries expected from Feb. 15.