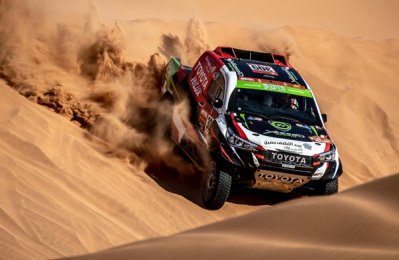 Yazeed Al Rajhi - aiming for the Dubai Baja cars title
The Dubai International Baja has attracted an impressive assembly of 93 competitors from 12 countries on its return to the World Cup stage, with plans unveiled to take cross country rallying in the UAE to the next level.
Announcing a starting line-up of 69 cars, buggies, bikes and quads, Mohammed Ben Sulayem, President of the Emirates Motorsports Organization, said the EMSO’s new partnership with Amaury Sport Organisation (ASO) can give UAE rallying a major boost over the next few years.
Cycling’s Tour De France is among the top sporting events owned, designed and organised by AS0, which produces hundreds of hours of programmes and has been appointed by the EMSO as official TV production company for both the Dubai International Baja and the Abu Dhabi Desert Challenge.
The French company has successfully switched the Dakar Rally from South America to Saudi Arabia over the last two years, broadcasting the event in 190 countries across the world. It is this kind of exposure that can propel the Dubai Baja and Desert Challenge to new heights, a statement said.
“The influence of ASO will help attract a stronger line-up of world-class competitors for both rallies, and take the events, and the UAE’s attractions, to a huge global TV audience,” said Ben Sulayem, the FIA Vice President for Sport.
“Growing the events and drawing the world’s best can also help attract new local talent and secure the future of rallying, which was where UAE motor sport began.”
Taking place from February 18 to 20 under the patronage of HH Sheikh Hamdan bin Mohammed bin Rashid Al Maktoum, the Crown Prince of Dubai, the Dubai International Baja is sponsored by Dubai Electricity & Water Authority, the Mohammed Bin Rashid Al Maktoum Solar Park and AW Rostamani.
The appointment of ASO and the launch of a new logo identity reflect the new vision of the rally on its return to the world stage after being ruled out last year by the Covid-19 emergency.
It has been cleared to run on government approval of strict Covid-19 protocol put in place by the EMSO. Lying ahead, and demanding maximum respect and concentration, are two legs of 192 km and 194 km across the rolling dunes and sabkha plains of the Al Qudra desert.
The second round of the 2021 FIA World Cup for Cross Country Bajas presents the intriguing prospect of a classic battle between two of the Arab world’s leading drivers, the UAE’s Khalid Al Qassimi in an Abu Dhabi Racing Peugeot 3008 DKR and Saudi Arabia’s Yazeed Al Rajhi in a Toyota Hilux Overdrive.
Dutchman Erik Van Loon, the 2015 Desert Challenge runner up, aims for another big finish in a Toyota Hilux Overdrive, as does Saudi’s Yasir Seaidan - third in 2018 - in a MINI John Cooper Works Rally.
Saudi Ahmed Al Shegawi, winner of the T2 production category in 2018, pursues the SSV crown this time in a CAN AM Maverick X3. In the national buggies class, Dane Andreas Borgmann aims to repeat his 2018 Dubai Baja success in a CAN-AM Maverick X.
Rising Honda star Aaron Mare faces strong opposition as he aims to complete back-to-back bikes wins in the opening round of this year’s FIM Bajas World Cup.
His title rivals include two former winners in fellow countryman Mark Ackerman and Mohammed Al Balooshi, British rider Sam Smith and Balooshi’s brother Sultan, who finished third in 2018.
Britain’s Isle of Man TT race winner James Hillier makes his baja debut in the event while Lithuanian Arūnas Gelažninkas is back in action after last month’s Dakar success when he won the category for riders competing with no assistance.
Kuwaiti quads star Fahad Al Musallam can become the first competitor to complete a hat-trick of Dubai Baja successes if he wins again on his Yamaha Raptor 700 R. -TradeArabia News Service