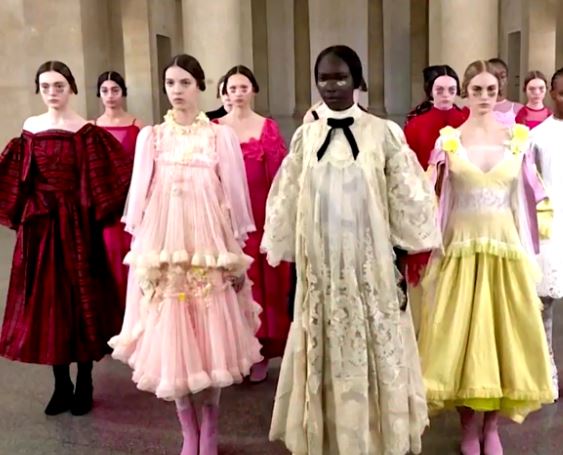 London: A completely digital London Fashion Week kicked off on Friday, with designers hoping to entice trend-followers from the comfort of their homes with their latest creations.

With Britain under a national lockdown, streamed videos have replaced the usual bustling catwalk presentations.

Nearly 100 womenswear and menswear brands will share their collections over the next few days, having to adapt to how they present their clothes in the midst of the Covid-19 pandemic.

“It is really difficult... for everybody at the moment but particularly in the fashion industry,” Caroline Rush, chief executive of the British Fashion Council, told Reuters.

“Fashion Week (offers) this glimmer of inspiration, uplifting, connecting with creativity and really thinking about the impact of fashion has on society and culture. And we need it.”

Turkish designer Bora Aksu said he was inspired by 19th-century French mathematician Sophie Germain, who he said felt her own isolation when she was discriminated against because of her gender but thrived.

“I was trying to find something that (can) bring hope in this time,” he said.

A polar bear and starfish adorned tops while fringed or sequined dresses were mermaid-like.

“I think we are realising now that it is not about quantity but quality and that in so many aspects of our lives things can be done differently and in new ways, fashion being one of them,” Fast told Reuters in emailed comments.

With the pandemic shutting stores, studios and factories as well as curbing travel, the fashion sector has been hit hard in the past year.

Earlier this month, some 450 British fashion industry figures signed an open letter to the government warning the sector, which contributes 35 billion pounds ($49 billion) to the economy, was “at risk of decimation by the Brexit trade deal” due to new travel rules and paperwork.