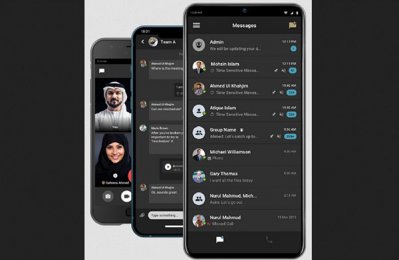 Digital14, a UAE-based leader in digital transformation and cyber resilience, has announced the latest release of Katim Messenger, the world's first ultra-secure chat application, now available to UAE businesses and all government entities.

It means that organisations can be confident that their mission critical information and communications are private, confidential, and secure, a company statement said.

Speaking at the Innovation Arabia conference, Nilesh Patel, EVP for Secure Solutions at Digital14 said: "We live in a hyper-connected digital world where the impact of the pandemic has accelerated digitisation. At the same time, businesses and governments are subject to constantly evolving security threats, often through mobile communications. This new reality requires a new approach and it's critical that we prioritise secure communications to protect our most valuable assets: sensitive information and data.”

The new release of Katim Messenger significantly advances the Katim Secure Platform, which was developed in the UAE with the world's first ultra secure smartphone launched in 2017. It is built with a zero-trust security posture and an industry's first multi-layer Secure-By-Design methodology with the signature peer-verified secure communication architecture of Katim Secure Platform.

"Companies have to think about their most valuable assets - their data and critical business information - and how they 'transport' something so valuable,” said Patel.

“In this era of instant communication, organisations worldwide are rapidly adopting messaging applications as the way to 'transport' business critical information.  To ensure the security of sensitive information and data, users must trust and verify who they are communicating to on the other side. The data must be protected end-to-end: while it is being processed by the application, while it is in transit and when data is viewed by the recipient.”

Katim Messenger is designed with comprehensive threat modelling and attack vector analysis, so that business communications remain secure across all the use cases. The data remains encrypted throughout its life, so it always remains secure and private. Unlike the consumer-grade apps, user data is never shared with third parties for monetisation.

Katim® Messenger is used by organisations on one device at a time per user for security reasons, within a secure circle of peers that have been registered by administrators and who are also using the Katim® Messenger app. The licensing of the app is based on the number of users.

"The new release now supports a cross organisation secure federation feature that allows organisations to recognise users from an outside organisation and trusted enough to be added to the closed loop within the Katim Messenger app. In this way, we are building 'circles of trusted users' of secure communications among businesses and government entities which will grow to become a secure business communications 'ecosystem' in the UAE," said Patel.

Self-destruct feature for safe sharing of files and documents

Katim Messenger has a self-destruct feature that allows documents and media files to be shared in the app, with a timer set so the documents and files will disappear at the specified time after being viewed by the recipient. The files are not able to be downloaded from the app.

The application is distributed securely and accessible for iPhones only via an organisation's Apple Business Manager account or through controlled application binary distribution for Android devices. The organisations can choose its deployment method – either through managed Katim® Messenger-as-a-service from Digital14 or deploy as a self-managed service in their own on-premise infrastructure.

"Your data always belongs to you. It's stored in the secure cloud in the UAE or on your servers if you opt for an on-premise deployment for your organisation," said Patel. Organisations can also control the encryption keys of the solution preventing anyone from decrypting their end-to-end communications. – TradeArabia News Service