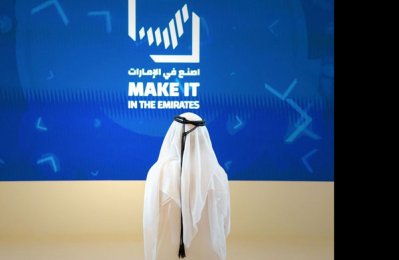 The UAE’s economy stands on the verge of a new era. One that will be marked with a dynamic industrial growth spurred by a raft of new local and foreign investments, says a Wam report.
This, thanks to the launch of ''Operation 300bn'', the new strategy from the Ministry of Industry and Advanced Technology (MoIAT) which seeks to fortify the nation’s well-established industries like petrochemicals, metals and advanced machinery and equipment, while stimulating new levels of productivity and performance in strategic sectors like healthcare and food security. The strategy will pay special focus on unleashing a wave of locally-driven future industries such as space, medical technologies, and hydrogen.
When it comes to space, the success of the Emirates Mars Mission, and the data that is now being collected by the Hope Probe will facilitate a new era of UAE-driven interplanetary research, product development and international collaboration. Supported by strong public investment, the opportunities are as limitless as the universe into which Hope was launched.
Biotechnology also offers an avenue of vast potential. The UAE is already a regional leader in driving Foreign Direct Investment (FDI) into biotech. Several research and innovation centres have shown the potential for genomics and precision medicine, which can uncover new areas for growth and experimentation.
Then there’s what’s been described as "the ultimate green fuel". Being an early adopter of clean hydrogen could be a game-changer for the UAE and those who invest in it early. Hydrogen projects are already well underway in Dubai and Abu Dhabi. And the UAE is also the first country in the region to lay down a regulatory framework hydrogen-powered transport. Industrial opportunities in this sector are vast.
The ambitious, three-pronged approach to the industry aims to diversify and turbocharge the nation’s already vibrant base, increasing its global competitiveness, ramping-up its resilience and generating new levels of in-country value, focused on future industries.
Ultimately, the strategy aims to more than double the industrial sector’s GDP contribution to AED300 billion by 2031 and elevate the UAE’s status to a global hub of unrivalled industrial expertise.
Owing to a forward-thinking leadership, the foundations for accelerating industrial growth have long been set. The UAE has become one of the most attractive investment propositions for international investors, thanks to a regulatory and logistical framework, flexible financing solutions, unrivalled information and communication technology, and transport infrastructure and 21 industrial economic trade zones which are conducive to sustainable business growth.
Furthermore, the government’s consistent support to players in the industrial sector has incentivized the globe’s biggest industrial companies to set up base in the Emirates across sectors that cover the entire industry spectrum from renewable energy to pharmaceuticals; from aerospace to machinery and equipment; from plastics to food and beverage (F&B).
The key to releasing this fountainhead of economic activity from within the nation’s well-established industrial base is to accelerate the adoption of advanced technologies and leverage Fourth Industrial Revolution (4IR) solutions and applications. Thanks to the leadership’s launch of the UAE Strategy for the Fourth Industrial Revolution (4IR) in 2017, the integration of advanced technologies and solutions into the UAE’s industry has been well underway.
Combined with the new momentum of Operation 300bn, a spirit of entrepreneurship and innovation is sure to weave into the fabric of industry in the UAE. The Strategy’s numerous initiatives and financial enablers will attract more local and international players to enter the fray.
This will help realise one of the key goals of the strategy: improving the UAE’s Competitive Index Performance ranking. The UAE ranked 35th globally in the Competitive Industrial Performance Index 2018, with the industrial sector contributing AED133 billion to Gross Domestic Product (GDP) in 2018, which represents an 8.4 percent share of the total.
The value of industrial exports reached approximately AED240 billion in 2018, while expenditure on Research and Development (R&D) in the industrial sector reached 1.3 percent of GDP. Figures from the same year revealed that the number of industrial companies operating in the UAE reached more than 33,000 – 95 percent of which were small and medium-sized enterprises (SMEs). The UAE’s industrial sector encompassed 737,000 employees within the same timeframe. These figures reaffirm the abundance of potential investment opportunities, combined with the opportunities for more growth and success.
It is on all these points that MoIAT’s strategy is building and seeking to improve by opening up the nation to innovative and forward-looking investment opportunities.